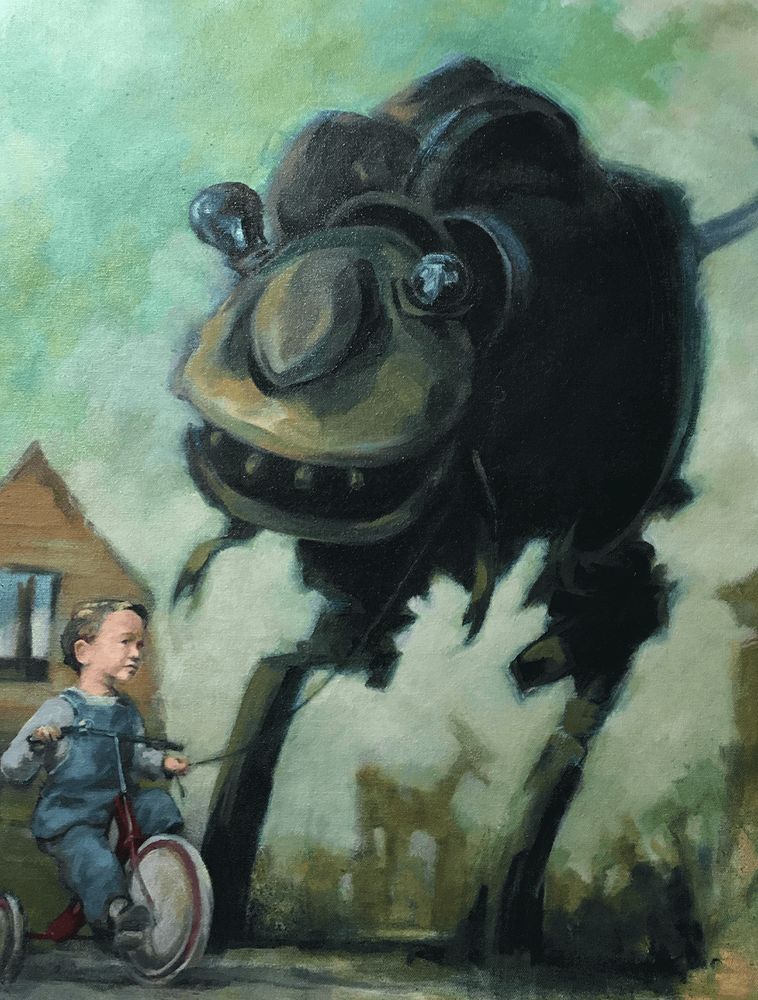 When the Array picks up an unusual signal from within the interior fringe of Synthex itself, there’s a reasonable chance that it’s just the relevant technological development on a world on the edge of breakthrough. A Knowledge Corps historian such as yourself could easily investigate such low-risk, low-reward assignments alone, but they warrant three-person teams so each field branch of the Initiative has representation. Still, it’s a nice benefit of these simple jobs that Sieversion for short-range intraversal travel is normally quick and painless. For you, as well as the Safety and Linguist representatives who comprise the rest of your party, that seems to hold true as the three of you gently come to rest, more than materialize, in the middle of a roadway in an apparently residential area in what you’d call a retro-tech, or early-modern landscape.

Despite the overcast skies, the sense of a peaceful, if quotidian existence on the streets of the neighborhood is palpable. Houses made of wood stand in good repair. Docking areas for glossy but clunky combustion-fueled vehicles that you recall are referred to as “driveways” stand in bright grey contrast to the black of the granite-pebbled asphalt. Small monocultures of various grasses, called “lawns”, in differing states of repair thrive or wither accordingly, and for a moment you wonder if it wouldn’t be nice to exist in such an environment.

To get the latest bad news on a printed pulp paper the day after it happened, or at the very worst, in the evening at a scheduled time, instead of on a full-cycle, instantaneous acti-feed. To have enough trees to build entire dwellings out of nothing but their remnants, instead of boggling at the year’s worth of energy price of a single pair of authentic wooden chopsticks like you see in the Core. To worry more about the length of your own tiny patch of grass than what will happen to your planet after it passes the point of being able to sustain grasses at all.

But no. All of that comes at too steep a price. You’ve seen far too many histories of fringeworlds eating themselves alive, or warring themselves into extinction, or just doing nothing besides growing fat and happy until their star went supernova to be seriously tempted to say, “to frag with the Core and this Initiative.” Still, you must admit that the prospect isn’t altogether unattractive. This place takes things you’d consider wild luxury for granted, and you purse your lips at the thought that the Sieve can only retrieve that which it has already passed through its quantum mesh. A mere handful, never to be missed, of any one of these “lawns” would keep the robotanists busy for at least ten builds, but it would disappear from your clenched fist as soon as you shipped through recall.

With the vaguest hint of jealousy on the edge of your conscience, you take the right turn indicated by your Portarray, and immediately recognize the source of the signal. At the end of the street, just outside of the “driveway” of a house positioned along one radial arm of a circular patch of pavement, known as a “cul-de-sac", sits a young boy on a deep red, pedal-powered tricycle. Next to him, towering nearly as high as the rooftops, stands a mechanical construct, jaws cast in a permanent metal smile, eyes made of incandescent bulbs, frame gently suffused with unconscious motion like only a living being’s can be.

Thinking deeply through your vast knowledge of technology timings as you and your teammates make your way toward the odd pair, you can remember nothing that sets such a precedent. Some worlds develop liquid crystal display 2 megabuilds before others, so a digital timepiece or a color display wouldn’t seem all that unusual here. A fully functional inorganic intelligence, on the other hand, should be at least an order of magnitude out of the question, if not two. You put on your most friendly and hopefully unsurprised face as you draw near enough to them to hear and be heard.

“My liege, Travis, we cannot ‘go fast’ at the moment. Organic lifeforms intersect your trajectory; likelihood of damage to one or more prevents me from taking this action. Perhaps his highness should command them out of his royal way.”

Travis cocks an ear, then seems to take note of your presence; his eyebrows raise and his eyes widen. He hurriedly flaps a hand at you and nods vigorously, “MOVE, MOVE! Trike King gonna go fast, go VROOOOOM!”

You and your companions look at one another quizzically. This child playing outside his home in a comfortable neighborhood is certainly no King, but his gargantuan playmate could undoubtedly pose a serious threat if it became aggressive. The Safety expert gives an almost imperceptible nod forward, informed, you decide, by the giant’s refusal to risk harm to organic lifeforms. As you continue forward, your Linguist speaks.

“Er... King... Travis, as it were. We... uh... your loyal subjects have come here to... pay tribute to your... Vrooom?” This causes Travis to break into a wide smile, and continue nodding, as if you should indeed pay tribute to his vrooom. Going along with this royal roleplay seems to be working. “Before we pay our tribute, though, tell us about the... power of your Vrooom?” The Linguist motions to the massive robot with one face-up palm.

“Ah, yes, we understand that, but, where did Timtim come from?”

“I see. So you just thought of him one day because you wanted to go vrooom and he appeared out of thin air?”

“No, imagined Timtim make me go fast for looooong time, since I got my trike. One day I come out, Timtim waiting here, make me Trike King, help me go fast! GO VROOOOM!”

“Oh. I see. Timtim,” the Linguist says, directing his attention to the massive machine, “do you have anything to add to this that might help some poor peasants understand a bit more about your relationship?”

“No, it’s just as his highness has said. He imagined me for a long time to help him go fast, and then one day, the day of his coronation to be exact, he came outside and I was here. Since then, we have been working together to go fast and vroom.”

“MOVE!” shouts Travis, visibly getting fed up with your obstruction of Vroom. Your companions look to you to make a decision about your next move, as you are the official leader of the group.

A: Get out of the way and let Travis and Timtim go fast? Observation is the key to understanding.

B: Try and find an adult? Someone has to be in charge of this situation besides a toddler tyrant and his loyal leviathan.

C: Find a way for the Linguist to make distracting small talk while you covertly take readings on Timtim? There’s no way it’s as simple as they’re making it out to be.

D: Use your Portarray to call a helmet and some kneepads through the Sieve? It won’t cost much, but if Travis is going to go fast, he might as well be protected while he’s doing it.

“Well,” you say, looking around at your team, “get out of his highness’ way!” As your party moves around behind him into the driveway, you address the toddler directly, “King Travis, show us the power of your mighty vroom!”

“Of course, my liege,” replies the massive mechanoid. The whirring of a motor begins to hum from inside the body of Timtim, and as it grows in volume and intensity, the incandescent bulbs that make his eyes glow brighter and brighter. Just as you’re beginning to second guess your decision due to the devastatingly loud pitch that has grown to a high whine, there is a sudden “PHOOOOMPH!” and Travis shoots off down the street at a speed that has to approximate interplanetary launch velocity, his little legs a literal blur of motion as they follow the fixed pedals in cycles far faster than any human’s should.

Almost sooner than you can register he’s come to a halt about ten driveways down the street, and gets off his tricycle triumphantly, jumping up and down and yelling “YAAAAY! GO FAST!” He smiles and waves to your group, before mounting up on his tricycle for the long, significantly slower ride back down the street.

You narrow your vision at Timtim, and ask, “What exactly is going on here, Timtim? There’s no way this child’s body should tolerate that kind of rapid acceleration, much less follow the pedals around at that rate. You have as long as it’s going to take him to get back here to come clean, or we will be forced to involve local authorities.”

“Mm. Yes. It IS as Travis has told you, officer. I am, in this place, quite imaginary, and quite far from my home. I suppose you could call me a ‘speed daemon,’ to borrow a local turn of phrase. My function inside the Clockwerk in my native plane is to make time; inhaling the past and exhaling the future might be the best metaphor I can offer. Not lost on me that my sudden and inexplicable translation here has presented me with a different opportunity to “make time.” To make time for this poor young human. His story is a sad one, and long, and surely for a different telling.

“In short, he is largely alone here, as am I. It is simple for us to enjoy each other’s company for as long as need be until our paths can be corrected. He is in no danger at any point during his Vroom. I only slow time in a bubble around him as he rides down the street. To an observer, and inversely to Travis himself, the distinction is quite visible, and produces relatively interesting results, if you’ll pardon the pun. Oh, but here he comes. I’ll ask you noble guest, not to spoil our fun, and if you would help us, please find out what you can about how I came to be here, and how I might get home. Some clean clothes and food for the boy would be appreciated as well.”

As Travis rides up, all smiles, you nod briefly to Timtim, having decided that he is very likely Travis’s best and closest friend in the world. “Well done, King! Well done! What a mighty vroom!”

“What kind of tribute, King Travis?” you ask.

[SHK-E Evaluation:
You have gained a small amount of KNOWLEDGE in investigating this anomaly. You showed HEART by considering the subjects’ emotional well-being, both in playing along with Travis’ fantasy and accepting the pair’s relationship in spite of its unusual nature. You did not prioritize the child’s physical SAFETY in your decision making. Other agents of the Para Initiative learn from and emulate the strategies of this successful mission now.