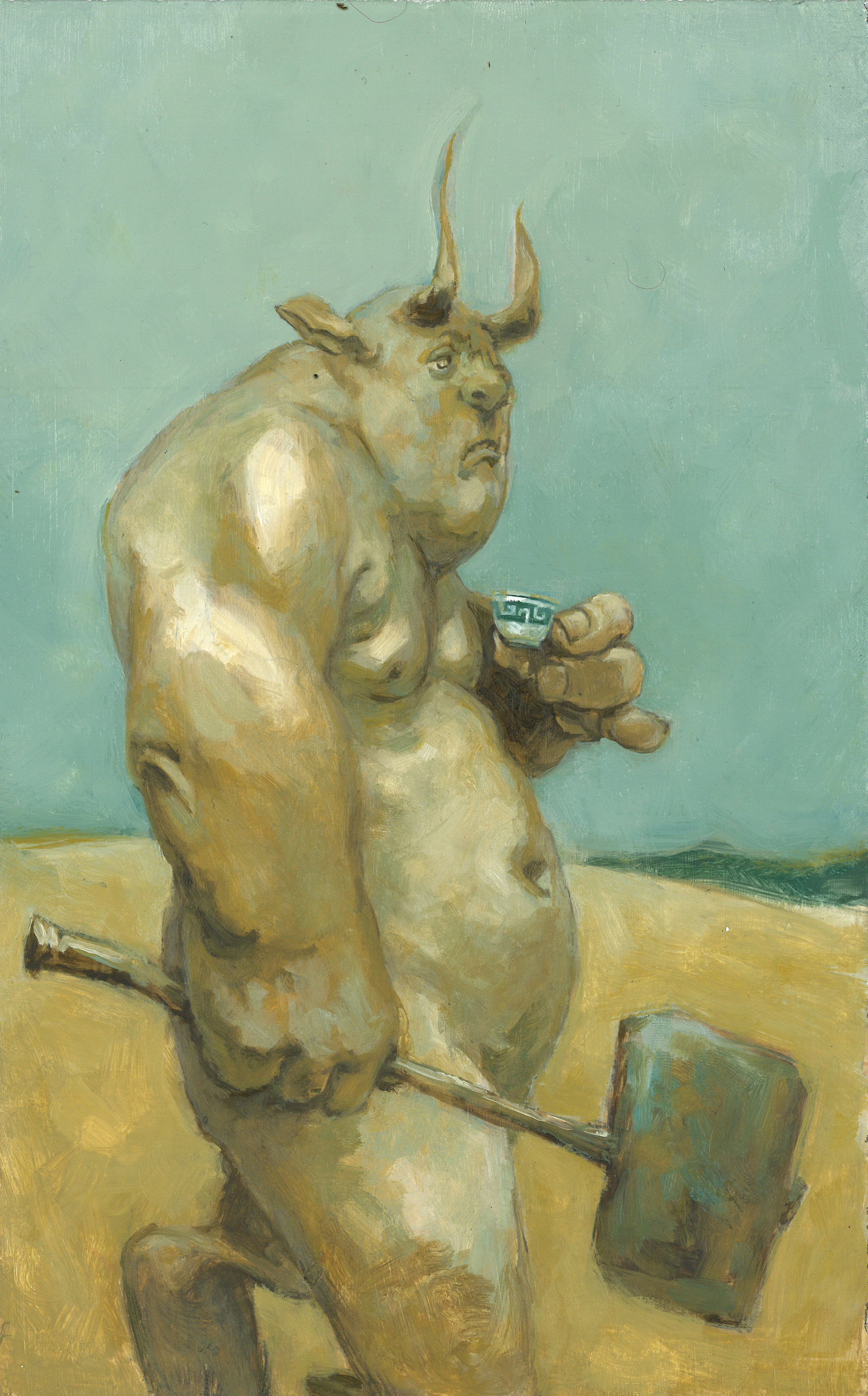 “Yes, I quite fully understand my character’s motivations, I’ve read, re-read, and digested the background information that you provided.  What I’m not fully comprehending is what aspect, what essential quality of his nature, requires that I be nude?” asked Teodoro, his voice, a deep, rich, basso profondo, containing a somewhat plaintive note.

“Ah!  Well, yes, that is a very good question!” the Director replied.  “You see, you are the manifestation, the very essence, of the Artist’s vision!  He Drew upon many forms for his inspiration, and envisioned you without any clothing, so that’s how you must be for this performance!  Don’t worry, our audience is not prudish, and here we are, performing at the fabled Stage Left Theater, in Center Stage, the very heart of Commedia!  They will understand that this is a matter of artistic expression, not the product of some prurient ogre fetish!”

Seeing that Teodoro was yet to be convinced, the Director continued,  “It’s true that you’ll be sharing the limelight with two other skilled thespians, but you sir, you are the big, bright, shining, star of this production!”

“Hmm, well I suppose, if it’s the Artist’s vision…” Teodoro said thoughtfully.  “Still, I must admit I would be more comfortable with a robe.”

The speaker, Teodoro, stood downstage center, lit by a single spotlight, the rest of the vast theater shadowed and dark.  Teo was indeed an ogre, close to three meters in height, with a bull’s horns and a bull neck.  He was powerfully muscled, but sported the proud potbelly of a man, or ogre, who indulged in more than the occasional pastry.  He was also, most definitely, fully nude, his putty colored skin gleaming with a light sheen of sweat under the heat of the spotlight.  Aside from the sweat, his only accessory was a stout sledgehammer, casually gripped in one massive, four fingered, hand.  Of the Director, there was no sign.

Deciding that the matter of wardrobe was settled, Teo continued, “I was told that the inclusion of my Grammar Hammer was a requirement for my casting.  I’ve yet to be contacted by the Writer, nor has the Set Designer been in touch.  I’m not clear on what is expected.  As you must be well aware, I’ve used it quite successfully on other productions to transform purple prose into the most sophisticated of stories.  And of course there was the matter of that rather dull chandelier, that with a gentle tap became one of the most talked about set pieces of the season.  In what capacity is my mallet to be employed?”

“Its use will be in the nature of visual effects.  For this production there will be a need for instantaneous reconfigurations of the set and modifications of the props.  Your glamorous Grammar Hammer has both narrative and practical applications.  Your character will be performing a rescue, and the hammer will assist him in that endeavor.  At the same time, you’ll be responsible for changing the elevation and orientation of the stage so that the action is always on full display for our audience.  Once you get the finalized script it will all make sense.”

A slight frown of concentration creasing his brow, Teo casually waved his free hand and a tiny, delicate, cup of tea appeared between his fingers.  He gingerly sipped the steaming beverage while mentally reviewing the list of questions he’d brought for the Director.  As he was about to speak, there was a loud cracking noise, like the sound of a powerful electrical discharge; the spotlight flickered and went out.

After a brief pause, the spotlight sputtered back to life.  The figure framed in its glow was no longer the towering ogre, but rather a startled and confused human woman holding some form of technological device, which emitted a thin trail of smoke and the strong scent of ozone.

“Uhh…  That was unexpected,” she mumbled to herself as the lights came up and the theater filled with startled staff.