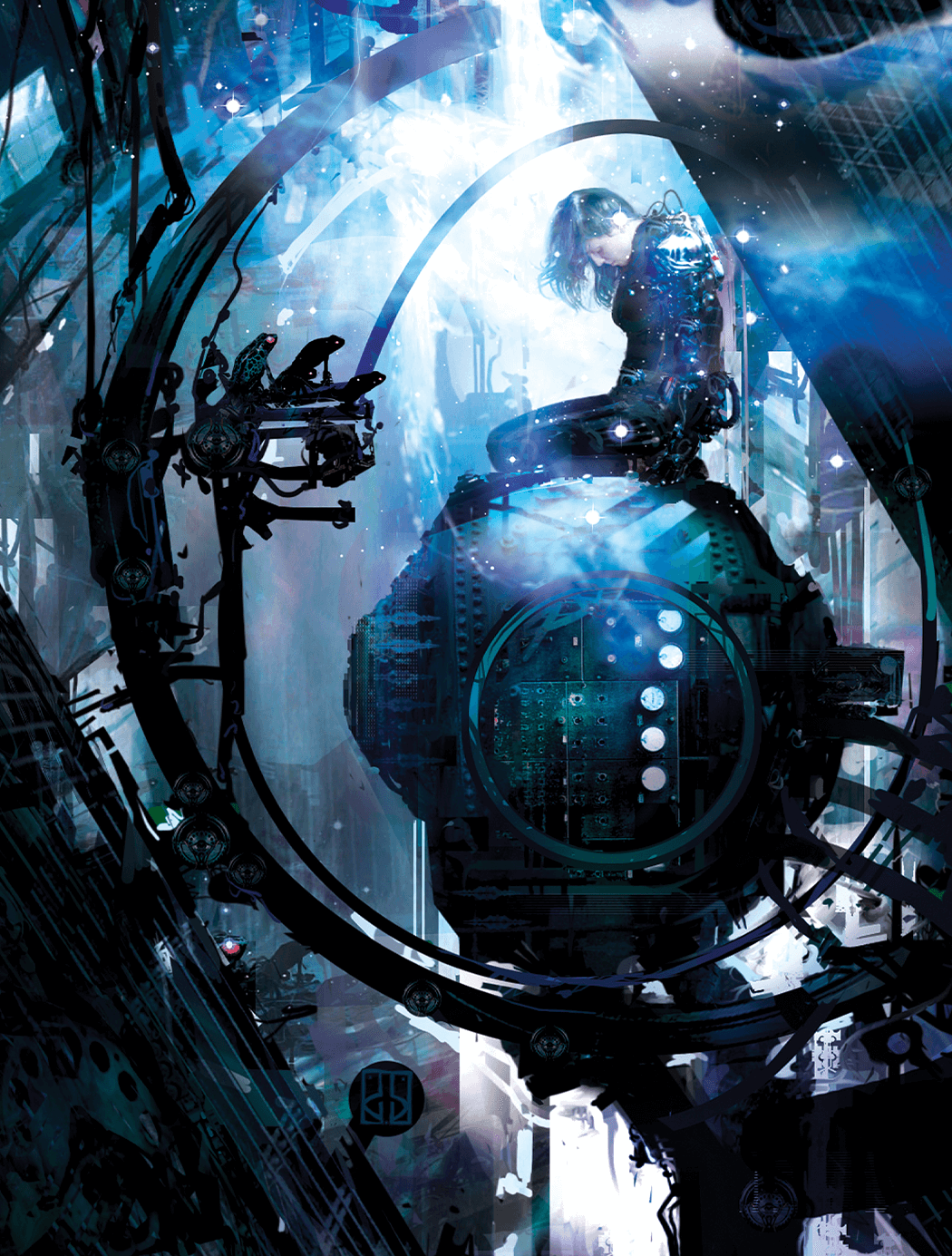 BELL-1: [italics indicate inaudible comms on BELL-User interface channel] Para, I’ve begun recording. All four of them appearing at once seemed particularly...significant, so I took the liberty of preserving it for future reference.

Para: Probably a good idea, Bell. [vocally] So, you four, it’s nice, but quite unusual to see all of you together. There must be a reason, hmm?

ELI: Something is happening.. Surrrely one as inforrrmed as you..

Para: If you’re referring to something I’d have seen on the holovids, I can’t say I’ve paid much attention. The news is always strange, and anyway, all my time these days goes into getting the Array calibration finely tuned and expanding the range of the Sieve prototype. Since I discovered the other...Verses, I guess we’re calling them... and that encounter with those strange... scholars, every bit of effort has been poured into improving the tech that let me travel there in the first place. I just wish those two had been able to tell me anything useful. Of course, the implications are exciting and all, but it also means the area I need to cover to try and find her... It’s just so much more...vast.  [sighs] Bell, run a quick search through the holos and see if you can figure out what they’re talking about.

BELL-1: Interesting how they can finish each others’ sentences. Not unlike our own communicat…oh. Oh my. Para, a check into recent unexplained phenomena has turned up an unusual number of results. On average, those type of reports across all of the legible valences in Synthex number around 12 per buildcycle. Since your... trip? That number has gone up to over a hundred, though mostly they seem to be coming from the fringe. And, Para, I hate to tell you this, but over half of them seem to be... disappearances. Places with low-tech or retro-tech are notoriously superstitious, though, especially when they get close to breakthrough. It might be nothing, but what amounts to an entire order of magnitude is nothing to mute for a cycle!

BELL-1 [aloud]: Wait, you can hear us on the secure interface channel? That’s supposed to just be for Para and me! I feel... I feel... transgressed upon! You’re... you’re... eavesdropping!

Para: Alright, alright, beings, just relax. At the very least, the work I’ve put into the Array and the Sieve so far lines up pretty neatly with helping us find out more about whatever’s bothering you. And, of course, I’d never forgive myself if I let anything happen to you. There’s still a lot to accomplish, but finding anomalous signals and getting to them quickly are exactly what these designs were made to do. I’ll need some help to get things up and running since we seem to be under a limited timeframe. Bell, that seems like something you could start working on now, I think?

BELL-1: It sure is, Para. Any idea what kind of help we should be recruiting specifically?

Para:  My first thought is that we might need to ramp up security. If more... disappearances... are happening, I don’t want them getting too close to any of us, or to the project. People with a background in safety protocols could help ease the burden of looking out for these little guys while we continue to amplify the machines’ resonance and reach. They’ll also be able to help us navigate the process of going public with new tech, which we will unfortunately have to do sooner than I’d hoped. This appears to be a bigger problem than just my own. Publishing can be a bit of a theft-laden highwire here in Delphi, as I’m sure you remember, Bell.

BELL-1: Don’t remind me! Spending half a buildcycle inside that thug’s dirty, tiny little external drive was the least comfortable in my entire lifespan! Shoulder to shoulder with ramshackle wormcode and unverified hashfakes, it’s a miracle I even fit in there, much less that I didn’t catch something nasty. Not to mention he only asked for 500 Petajoules in ransom-- [scoffs] I’ve never been more insulted!

Para: Aww, no amount of Joules would be enough for what you mean to me, Bell, but I agree, 500 Peta is absurdly low considering how much time went into writing your code. Anyway, frogs, anything you’d care to add to the list before Bell starts recruiting?

Para: Sounds like Axl is on the same page as me, but, yeah, Dyo, it would make sense to start looking for leaders that can operate smoothly in the field. We definitely never want to cause harm or conflict, and some xenolinguists and cultural experts go a long way toward that. Sah’s got a point, too. If this project is gonna have legs, we’re going to need more power. The tech itself is going to attract some investors, but finding people willing to stake their Joules doesn’t just happen overnight. Eli’s idea to focus on information and recruit scientists would help us get the Array and Sieve running better faster. Even though I’ve done this alone up until now, it never hurts to have more eyes checking your work. And I guess we’re gonna need a catchy name for Bell to put out there if we want to have any hope of recruiting anyone at all. Any ideas, guys?

Para: Hmmm.. I guess I am going to have to take the initiative... [brightly] As a matter of fact, I will. “The Initiative!” There’s your title, Bell, now get to work finding us some strong talent. Since there doesn’t seem to be a consensus among our amphibian chorus, do you have any thoughts about where you might begin?

A) AXL was a paranoid little critter, but if he was even close to right about the scope of the threat, shoring up our safety protocols was a good place to start. Not to mention Bell's personal feelings about keeping the tech out of the wrong “scuzzy” hands.

B)  DYO was the most relatable of the weird little toads, and finding help in the unknown locations we plan to visit is the key to our overall success. Cultural expertise solves some problems nothing else can, and quite a few problems that other things can.

C) SAH was a bit brusque calling our resources “meager,” but a point was a point. The time was coming when this “Initiative” was going to start to snowball, and securing the energy and resources that it would require as it grows would be a solid foundation.

D) ELI might be an inscrutable little enigma, but our core strength was in the quality of our science. Just look at how awesome Bell himself was, if you needed proof that ramping up the speed and scale of technological works was going to yield the most benefits.

Tie between B) DYO and D) ELI, only one vote separates them on day one, so we will move forward with both.

BELL-1 continued, “DYO and ELI had both offered us options that felt right, that aligned with the Initiative’s goals. I couldn’t tell if I thought one idea was better than the other, so I set about pursuing diplomats and scientists equally, even though it meant my attention was split.

“When the VOLSTAR crates ended up arriving four buildcycles late because of the second tech-hostage crisis I was forced to live through, I wished that I had listened to AXL and shored up SecOps. Thank the Coder it wasn’t me being ransomed again!

“Not to mention, we’re still struggling to keep everything powered up 360. Maybe finding some serious fusion-range Joulestakes should have been a higher priority. Still, the early hires got the Sieve shipping and retrieving farther than we ever thought possible, and let us make great local inroads into a lot of Subvees.

“If it had been up to me, I wouldn’t have done anything differently. Wait.. what do you mean it was up to me? And anyway, shouldn’t you be prepping for ship to your next Verse assignment?”