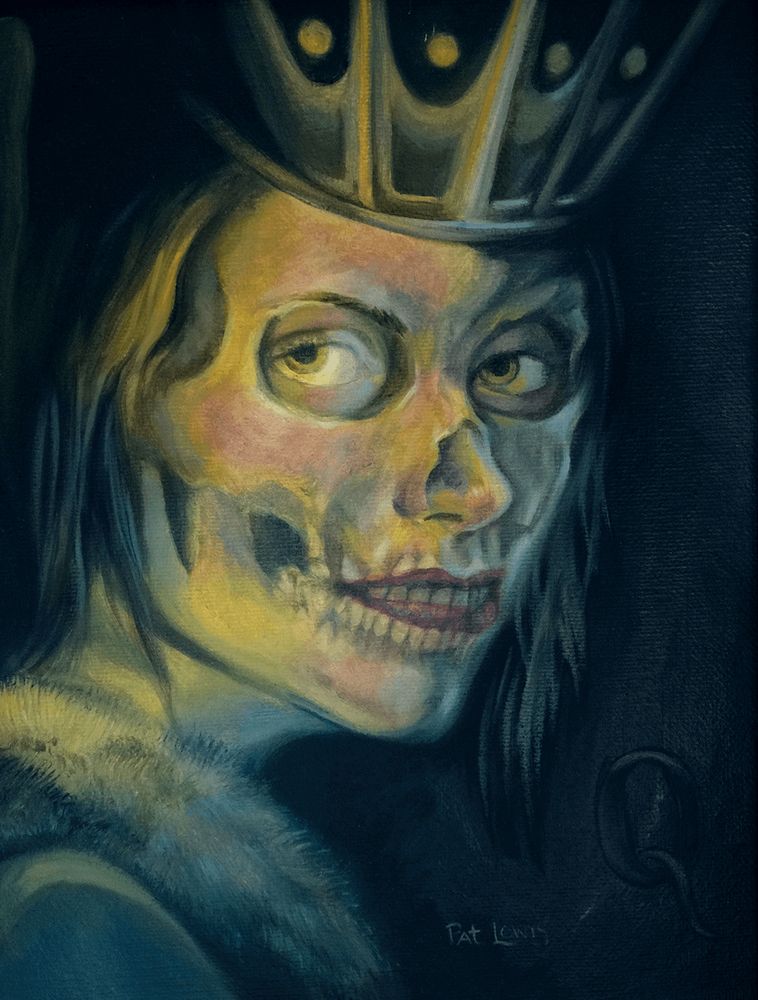 “Hm, yes, perhaps it was so. Tell me, pet, having heard the stories of poor Roydice, and the young princess who I once was, have you come to any conclusions about this neverending cycle? Do you have any ideas for how you and your Initiative might be able to resolve the situation between myself and the lord of the Crumbling Keep? No? More information, I suppose, will be needed, but information I have, pet. Let me say more of the times between, and of undying love.”

The princess’ silent rage at the bare inconsideration that her circumstances demonstrated remained, as did her twisting plot to undo the foolish situation altogether, with the help of her grandfather’s sword. Little did she know, however, that both would soon melt away like the last vestiges of winter snow on the hillside in the shining sun of the warm spring.

Her voyage from home was made in appointed splendor; accompanied by a complement of mounted guards and their liveried servants, the carriage itself, drawn by four horses of the famous wild coastal stock, was exquisite cherry wood with silver filigree, and spared no luxury of comfort in its interior, from the plush seat linings to an icebox filled with treats and snacks, and a cleverly designed drainage that simply saw the accumulating moisture out through a hole in the bottom of the floorboard. The princess, too, was resplendent, her emerald-colored dress a gentle contrast to her dark tresses and amber eyes, and well cut to accentuate the fact that her athletic frame had only become less gangly and more lithe, easier and more naturally befitting her during her journey into womanhood.

She had wept, and bitterly, upon her fanfared exit from the city that had been, no, was her only home, believing herself betrayed by the many smiling and cheering faces who had turned out into the streets to bid her godspeed. Her parents, too, had made a show of emotion at their farewells, though it was only to be a short time until they would meet her at her new home in the Keep for the wedding ceremony. Unfortunately, matters of diplomacy required that they stay behind and receive some distinguished guests, presumably to smooth over the ruffled feathers that those nobles had felt at not receiving invitations to the wedding themselves.

At least they had granted her request, though with no small bit of confusion as to why, to allow her to bring the previous king’s sword with her. Attended by her three closest chambermaids, and the Sergeant of the guard company, the princess passed the first part of the journey in sullen silence, staring out of the carriage window as the landscape turned from urban to rural, even going so far as to decline the opportunity to enjoy her favorite pastry, a plum tart, still deliciously chilled, when her attendant ladies broke into the icebox an hour outside of the castle.

Still, the stoniest mountain face is eventually eroded by wind and rain, and so was the princess’ resolve; the journey itself would take four days, and anger, manifested as mood, bears a high cost to upkeep. Staring down a lot of work for little in return, she eventually allowed her demeanor to brighten, especially so as not to offend the noble houses who provided her party overnight lodgings. On arrival at each of the three stops on the long road, she put on her courtly manners, and behaved with the grace and poise that was her reputation.

It was shortly after setting out extremely early after their third overnight stay that the Sergeant marked the river crossing that denoted the line between the kingdoms. “Highness, this is it; on the other side of this bridge, we’ll enter into the kingdom of the Keep. An exciting moment for you and your young ladies, I’d wager; a salty old dog like me has seen his share of borders, but you’ve never left our lands before, have you?”

The princess shook her head no, though for the life of her she couldn’t understand why people seemed to be so obsessed with drawing imaginary lines on the ground. At least in racquets, the lines served a purpose—to determine whether the quoit had landed in or out; the notion that people should be considered in or out because of which side of a line they had been born on was ridiculous. “It looks awfully a lot like our side of the river, the other side of the river, don’t you think, Sergeant?”

“That it does, highness, that it does. And these outskirts of this kingdom likely look much as ours do, as well; hamlets with a tavern and a longhouse, farmland, the occasional donkey in the road. But I think you’ll find that all the similarities in between are there to highlight the differences in the finer places. The Keep and its city is something special, indeed.”

“Hmph. I’ll take your word for it, Sergeant.”

“You need not do that, highness, for you’ll make your own judgement soon enough,” said the Sergeant, with a kind smile. “If you’d been packed away up north to the icy lands, or across the water to the Caliph’s desert, I’d have truly felt sorrow for your fate in my heart. Where we travel now, though, is a sight to behold, and a place I think you may one day come to regard as you do our own home.”

The conversation inside the carriage once again lapsed into silence, but as the day wore on, and the mustard-colored farmlands gave way to more lushly green forest, with gently rolling hills and valleys, the princess began to feel a sense that she was, in fact, in a place that was quite different than anywhere she had been.

As the setting sun painted the sky in the airy swirls of pink and purplish clouds against a deep radiant orange glow, the carriage crested the final rise before beginning its descent into the valley of its destination. “There, highness,” said the Sergeant, with a gentle nudge, pointing his finger askance out the front window of the coach. She leaned to look with her brows furrowed, and startled her ladies-in-waiting as she let out an audible gasp.

The Keep. Its white, asymmetrical spires silhouetted impossibly high against the watercolor backdrop of the beautiful sunset, the city sprawling around its base at least double, likely triple the size of her home, and somehow possessed of a feeling of livelihood, abuzz with the hurried completion of last of the day’s tasks in the face of oncoming night. It was marvelous; a place to die for.

The Sergeant’s lips broke, despite his obvious efforts to control them, into a wide grin.

Some time later, after the party had been welcomed with the usual aplomb, and fed, and showed to their well-appointed chambers by the Head Steward, with his distinct apologies that the king was attending to some pressing business and could not be there personally, and a surprised raised eyebrow at the princess’ insistence on carrying her grandfather’s sword with her, she found herself alone for the first time in a long time. Her attendant ladies were in adjoining rooms, but for the moment she had only the company of her own thoughts.

The idea came, unbidden, that she felt a dizzying excitement at the splendor of the Keep and its bustling city, that she was lucky to have the opportunity to explore it, try new things, and meet new people. But no! It was true, she was fortunate to have wound up in a place as nice as this compared to some of the other possibilities, but it was still unfair, and she had been given no say in the matter. If she had come to this place because she wanted to, then it would be different, but this way, this custom, was not right.

As she wrestled with her warring emotions, she heard a slight rustle outside her door. The dark shadow of a pair of feet was visible through the cracks, and the muffled clink of someone trying to use a key but keep it silent was followed by the slow scrape of it interacting with the metal innards of the lock. The princess sprung to the closest means of defending herself—the heirloom sword, and snatched it up with two hands, pointing its tip toward the door and assuming her best racquets stance.

There was no time to call out, nor any guarantee that the guards in this place would be quick or even willing to come to her defense. Her ladies-in-waiting had less martial training than she did, and would likely be of no use either. No point in bringing them running into harm’s way. As the door slowly began to swing open, she spared a glance in the mirror, to steel her resolve, where the flickering candlelight playing on her expression gave a brief but unsettling impression of a skeletal visage.

She blinked, and it was gone; nodding once to reassure herself she turned her gaze back to the door, which opened wide to reveal... a tall, handsome man with a crown on his head. His quick, intelligent eyes looked to her and opened wide in surprise on registering that she was not only armed, but brandishing the weapon at him!

“Oh, I never can remember what that beautiful fool brought with him that first night. Of course, I lambasted him up and down for entering my chambers without so much as a knock, but it was his castle, after all. And I must admit, I wasn’t so embarrassed as to turn down his offering. In fact, it rather quite endeared him to me, though you mustn’t tell him I said so, pet. Hmm... what do you think it might have been?”

A: A racquet; “I’ve never played the game myself, princess, but I’ve heard of your skill and I hope that you’ll teach me on the court that I’ve had installed. With one as lovely as you as an enthusiast, it will probably even take off in popularity across the city!”

B: A tray of plum tarts; “I have heard these are your favorite. The fruits don’t grow here, but I sympathize with how unsettling this whole experience must be for you, so I had some imported. I want you to feel happy and comfortable in my... er.... our home.”

C: A key like the one around his neck; “It can open any door in the Keep. Though we are not wed officially, I want you to know that you have my trust. I see you as a partner and equal, and offer you the same access to everything that I myself possess.”

D: A beautiful golden dress; “The reports of the gorgeous hue of your eyes do not do them justice, milady. The pressing business my Steward referred to was to go pick up this gown from my finest tailors. I apologize for intruding so late, but I wanted to ask you to wear it in the morning to breakfast, to match with my own outfit.”