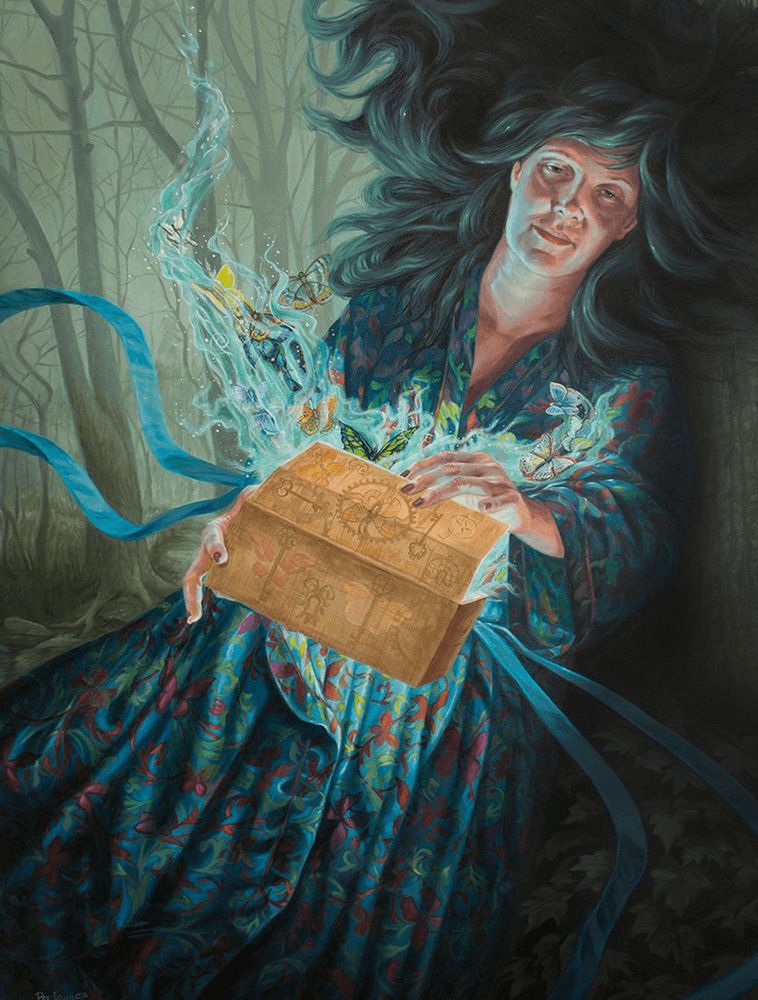 The chilly swamp is not what you expected to find deep in the heart of Fantasia.  Grey-green trees stretch upwards from the spongy earth, leafless and covered in soft moss. Hard lichen-like materials cling to the stones and rotting wood amongst the scraggly brush that covers the ground, tugs at the fabric of your clothing. This world is familiar, but not quite right - the soft wind hits your face in quick bursts instead of the gentle sigh of an Earth Zero breeze. The light reflects back from a thick atmosphere of pallid steam that hovers above you, lower and closer than the skies of home, creating a shadowless ambient glow of daylight, or someIight, the source of which cannot be discerned. This world is uncanny, and a shiver crawls into your spine.

Your crew stands behind you, silent and unsure, and their nervously shifting weight and darting eyes tell you that they’re equally eager to depart from these strange, desolate moors. Before you can open your mouth to give the order to pack it all up and prepare to go, there is an unmistakable ping from the Portarray–and it’s close.

A woman spins towards the sound of the device, startled, though her gentle gaze holds a weary kindness. Her dark eyes are heavy under the soft folds of her lids. Her skin reflects the sickly ambient light with a shimmery luminescence that surprises you, and you notice how beautiful the sharp geometric shapes formed by the deep lines in her face are in their bizarre organic symmetry. Her thick ashen-colored hair falls in tresses down her back. The dark robe draped over her shoulders is tied loosely at her waist, and as the fabric sways with her movements, you're drawn to the turquoise and saffron patterns that shimmer as the fabric catches the light. The glimmering shapes are scratched chaotically by the billowing light … emanating from the small golden box held tightly to her chest.

That, you think, is surely the source of the reading.

She looks back at you with amusement in her sad, kind eyes. She smiles, just barely as if there was something both tragic and hilarious in your warning.

“Dangerous indeed, my friend, but as for this truth? ...I of all beings need not be told. Do you know who you speak to, child? Do you know how long I have wandered through this world, and others, carrying the shame of my ignorance upon my back? No, you couldn’t know… why should you? How could you?”

She places the box to her hip and uses her right hand to illustrate before her like the conductor of her own soliloquy.

“There are not many of us who can recall the splendor of our youth without the rosy glow of nostalgia… for those of us born before, well, we once knew splendor in the full truth of the word. But, that was before..”

She laughs bitterly, dropping her gaze to her worn and fragile hands, made all the more pallid by the stark contrast between the shimmering golden box and her ashen matte skin...

She tilts her head back, eyes closed, and her hands move to the clasp of the glimmering golden box…

"....birthed from my foolish ignorant heart.”

She places her fingers firmly upon the spring of the clasp, ready to snap the box back open as she continues.

"I never meant what I did, back then.. why would I? What did I want, then, but love, and even then, it was only just a little that I needed. I had no reason to lie… not a bone in my mortal body knew to be vindictive. I had not the wit for it, to be cunning, to be cool… the best I could do was being present, and that alone was my entire motivation."

You sense the hint of a question in her gaze, and no small amount of remorse. She looks from you to the box, and back again, as though her story, and its, should be known to you. Seeing that you only appear to be concerned with the danger it presents, and not immediately cognizant of her identity, or the box’s nature, she elaborates.

"After alI the terrible curses that had been placed inside by a vengeful deity were unleashed by my damned curiosity, I used every last bit of my mortal strength to pry the lid closed back, but that detail was lost to time. I recaptured hope, protected the one silliest, most human little joy.”

She chuckles, an earnest bit of mirth that does, for a moment, bring a sliver of hope to this morose environment.

“Once I realized what I had, I nurtured it, traveled with my burden across many realms, trying to repay my debt with kindness. I soon realized that the divine magic of the artifact could carry things from places they belong to other places where they would never otherwise be. Collecting hopes from bright places has been my task these thousands of years, and now, releasing them into places like this,” she waves her hand around at the drab scenery,  “is my way to repay the suffering I caused. And so, here we are. Me, with my attempt to atone, and you, with whatever brings you here. Surely it’s something of importance. I’ll ask you, human, who has suffered all that you have suffered in your days because of my past actions, what do you think is best? ”

Will you tell her:

A: That you support her quest for redemption, and that releasing hope into hopeless places is probably for the good, despite the fact that the hope is not native to the environs.

B: That you think it is dangerous to tamper with environments; they have developed their own ecosystems because of internal workings and pressures. No amount of past sins to atone for justify untested means.

C: That she can and should lay down her burden. She has suffered long enough to pay for her crime, and the Initiative has allies who could repurpose a powerful artifact like the box into something that can guarantee a positive effect.

D: That she should continue to carry the box and nurture Hope. Even after all her trials, she manages to carry it in her heart, and she will know when the time is right to unleash it all at once, in a moment when it will be more critical than right now.

[Historian's Note: A majority of the Para Initiative wished for her to keep the box, with 9 votes.  3 supported taking on her burden, 3 supported her quest for redemption, and 1 thought it best not to tamper with unknown environ's levels of hope.]

You look into her tired eyes, and you see her for what she is… She is a kind soul, cursed by fate and chance, punished for an act of ignorance that left her burdened with the guilt and shame she has carried for millennia. And yet, despite the crushing weight of her sins, she continued to walk. You look at her slight figure, her weak hands and pallid, exhausted eyes, and you see a strength of heart and character that rivals the vigor of the greatest beast, as resilient as the light of a dying sun.

“This vessel is a powerful object, and it can be dangerous… As a member of the Initiative, it’s my sworn duty to gather knowledge and to protect the integrity of all existence. You must understand, this is bigger than you or me. If this object isn’t used carefully, it could be devastating… You know better than anyone what can result from the smallest accident. I can’t allow this object to fall into incapable hands. ”

She sighs and looks to the box in her hands with a resigned smile. Just as she begins to stretch her arms toward you in offering, you interrupt.

“Which is why I’m going to ask that it remain with you, in your and only your possession. You may be the only being in this world, or any other, who truly understands both its power for good, as well as its potential for destruction. I know that you know the difference better than I do. Tampering with environments, bringing hope where it doesn’t belong can be dangerous, but nurturing and fostering its growth is vital. One day, we may desperately need it. Please, continue to carry this box with you and care for the powerful force within.”

She smiles at you, and you see a flash of the beauty that once adorned her face. Her dull eyes shine for a moment, reflecting the warm golden light of the box and the Hope within it.

Pandora says, “You have my word.”

[SHK-E Assessment: You have gained SAFETY, knowing Pandora is out there somewhere, collecting Hope in case some day it is needed.  It is somewhat HEARTless to have her continue to bear this burden alone after all these millennia.]