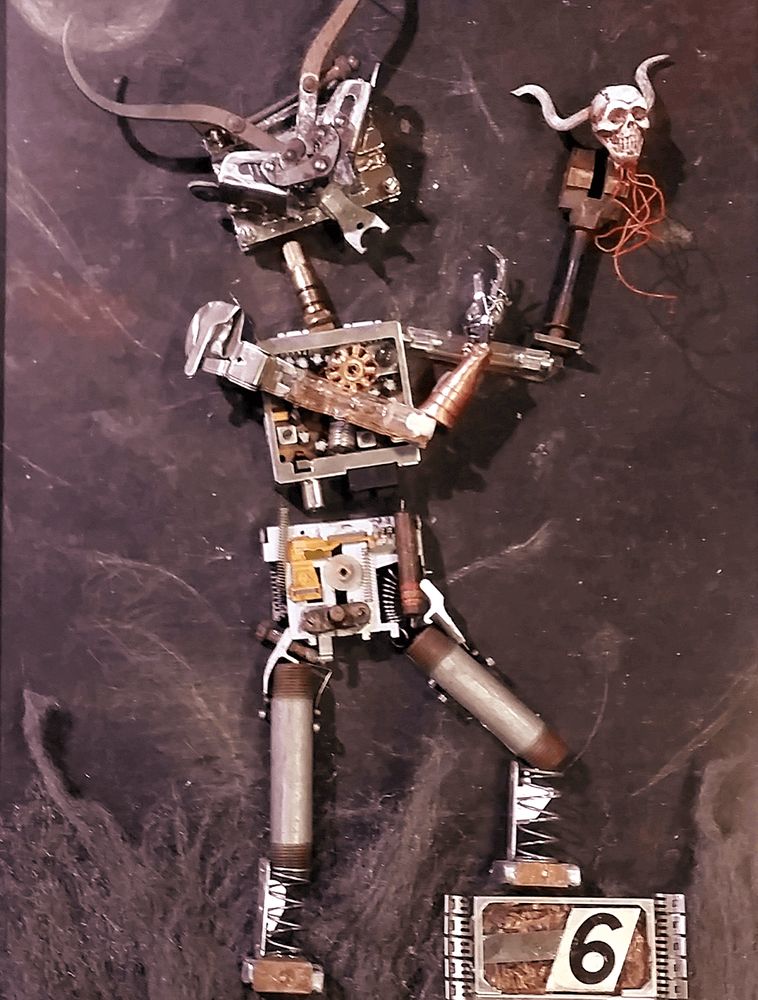 You sit in your office at the Hub, thankful for a low-key quiet day for the first time in a long time. Between the Doctor’s unexpected return and debrief, the VOLSTAR development timetable, and the episode with the metaphysical king and his ‘evil’ twin, it’s been quite a livewire around Initiative central recently. Having a chance to catch up on local happenings by scanning the feeds, taking a leisurely lunch where you don’t have to scarf something down while standing up, the little luxuries you don’t know you’re missing until you finally have a chance to enjoy them, today is full of them.

Still, you think, you should probably clean up the remnants of the take-out from your favorite Core-Rim fusion place, Dottie Yoo’s, before the delicious weight of dredge-fried smelt and pickled shredded kelp lulls you into a post-meal coma. Blowing air as you rock back and use your chair’s return of momentum to get to your feet, you swipe up the containers and bag with one hand to take them to the upcycle processing feed, where they will be broken down into molecular constituents and reassembled with just over a 95% efficiency rate.

Wild to think, you think to yourself, as you take the last sip of the tapioca bitterfizz in your other hand, that people used to think upcycle was gross when the technology was first being developed. Maybe a misunderstanding of scale made them believe bacteria or saliva could stay attached to the “re-used” molecules, or maybe it was the confused estimation that fresh-fabricated dinnerware was somehow NOT made of previously configured molecules? Either way, its eventual societal acceptance made take-out significantly cheaper, not to mention the upside for oceanic biomes.

As you dunk the remnants of your meal into the process primer, there is a miniscule “ptlk!” that you aren’t accustomed to hearing from the unit, but could just be some kind of new upgrade. It has been several builds since you were able to find time to eat a normal meal at the office, and longer still since you could order and collect lunch take-out.

You aren’t sure it came from the machine, though. The quality of the little noise almost seemed to resemble how some agents described the underground dragon’s telepathic voice in their minds, but inverted, as if it came from all directions at once. You shake your head rapidly and blink a few blinks intentionally—maybe the dredge-fried smelt wasn’t the best idea in the middle of a workcycle, no matter how great it tastes.

You walk back to your desk, contemplating the wisdom of returning to a seated position for at least the next hour or so, and tap the touchscreen to bring up the Initiative mainfeed as you stand, to see what you might have missed during your lunch. Luckily, not much seems to have taken place during the last decile, and you get ready to run your routine surf through the Safety Ethics, Knowledge Corps, and A-T Linguistics channels.

A tiny, tinny version of a junk-o-tech robotic voice, this time originating from a recognizable position just underneath the boundary of visibility created by the front edge of your workstation cries out in dead seriousness among a hailstorm of low bandwidth static:

Your brows furrow as you lean forward confusedly to try and get an angle on what exactly is the source of such a ludicrously lo-fi harmonic. They raise in reflexive disbelief as your gaze falls upon what looks like the prehistoric ancestor of an antique Serv-O-Bot, no more than half a meter tall, poised with one leg atop the remnants of a mailbox, and holding a facsimile of a minotaur skull in one hand. To no one in particular, or perhaps the faux-cranium, it continues:

“Excuse me,” you interrupt, “What are you doing in my office, and how did you get here?”

The primitive-looking construct looks up at you, then back at the skull, then up at you again, then speaks with the tone of a cheap wax dubplate, “I got here walking onto the scene from stage left, and I’m doing Act 5 Scene 1 of =6yEon, mang; what are you doing?”

“Uh,” you begin, a bit confused, “I’m just checking the various tubes for new information at the moment, I guess?”

“Sounds really important,” says the junkbot in a sarcastic equivalent of an AM radio scrape, “how about we settle for ‘no comments from the TUBER gallery’ during my performance?”

“Your performance? Feel free to have a look around, but this isn’t exactly a concert hall,” you reply, waving a disinterested hand in a dismissive 360, “and anyway, that low-fidelity scrapheap nonsense you were spouting when you showed up didn't seem like much of a performance at all.”

“KEK! No respect for the classics, kids these days. As if 8i77li351-1@|<e5 wasn’t a thing. Newfangled code, visual cute-ification. Enough to make a dedicated interpreter of the old languages hang up his .sprs and just relax,” squawks the tiny automaton, who you notice to be somehow now reclining on a beach chair, with a margarita glass in the hand that previously held the skull, and a lit cigar in the other.

“Or what?” asks the diminutive junkbot, as he expressively ditches the cigar onto your office’s floor, “You’ll have me sent to the old trashpile and melted down? You’ve got a lot to learn, kiddo, and I’m not going anywhere until you start to figure it out.”

"That’s fine,” you say, “I should have known better than to think that I could have a normal day. Make yourself comfortable. I’ll get Para to come have a look at you as soon as she can.”

A: Para’s an absolute monster of a scientific mind—be thankful if you can get out of here before she picks your primitive exposed circuitry apart!

B: Para’s a master linguist, so you better make sure you aren’t just full of hot air when it comes to antiquated references!

C: Para’s a security savant! However you got here, and whatever you’re trying to do, she will figure it out, so you might as well give up already.

D: Para’s in dire need of a source of renewable energy. You seem particularly sprightly and inexplicable, so I’m sure you’ll do nicely.

[Eye-witness Report: Members of the Para Initiative voted to describe Para herself as a security savant with 7 votes, with 4 votes for a genius scientist, 3 votes for threatening to use the strange bot as a source of power, and a single vote to show the synthetic being up at its own lingual game.]

"Oh, you're going to tell mah..." the figure begins, before a tiny door that wasn't there opens on your desk, a long metal pole with a hook at the end catches the little figure, and they are dragged through it before they can finish their sentence.  The door slams shut, and winks out of existence with an audible pop!

You blink, trying to decide whether or not that really happened, but realize you should immediately begin filling out a full eye-witness report on the incident.

[SHK-E Assessment: The Initiative was a little better than anyone thought it was at keeping everything secure.  Para herself has prioritized recruiting scientists and diplomats because she was confident that her own leadership would ensure everyone's SAFETY!