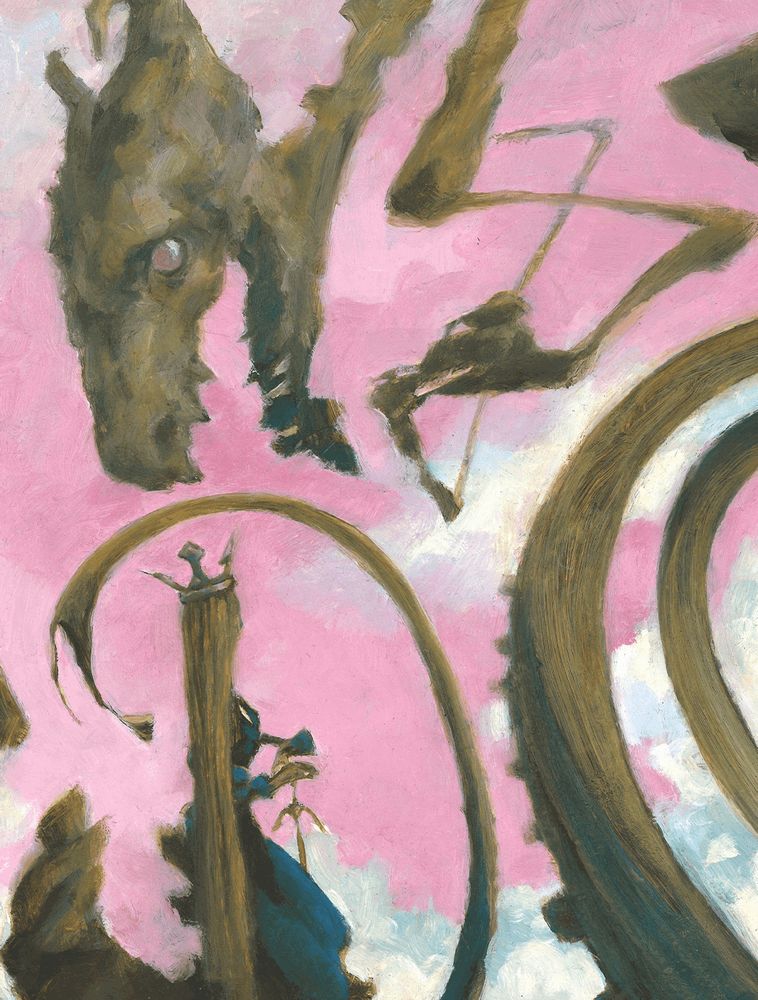 “Hmm, yes, that may have been it. Your kind is so clever, so creative! Tell me, then, pet, will you turn your attention to another question? A brief departure from our tale is all, to an earlier time, to ply your nimble mind to a deeper mystery. And perhaps to come to know more of me, when I was a bit less... shocking. Agreed? Then let me spin a yarn.”

It began innocently, in a faraway kingdom, as most tales of princesses do. Good fortune and good character had brought the land to blessed times under her father’s reign, and he was equally blessed with a happy marriage to a wonderful queen, who, in due course, bore him a happily gurgling baby daughter. Idyllic and serene were those first years of her precocious ramblings about the palace, first on all fours, then on her own two legs, and always with a singular smile on her face, and a sparkle in her eyes.

As she grew, so grew her parents’ and her subjects’ estimation of her. She seemed to be possessed of her father’s kindness, and her mother’s wit, and even animated by the vigorous zeal for life that many attributed to her grandsire, who had won great glories at tournament in his days as a petit-enfant of the kingdom, when noble men were still inclined to tilt with him for all their worth, before his ascension to the throne became eminent and he was sadly reduced to the indulgence of his athletic spirit by playing at racquets, a far less potentially lethal pastime. By all accounts, though, he made as fine a showing on the clay as he had in the arena, and his granddaughter followed in kind, earning a reputation at twelve years old as a dogged opponent at rally and volley for even experienced adults, made all the more unsettling by her seemingly boundless energy and her ever-present smile.

Those who knew more, though, would have claimed, but only in hushed whispers, that it was the spirit of her mother’s mother that animated the young princess so. Grandmere had, as had the princess’ mother, and eventually the princess herself would be, been brokered as a political bargaining chip, married outside of her own volition to a rich man somewhere by a rich man from somewhere else as the material representation of alliance, or of favor, or of whatever whim came to their mutual minds. Signed, sealed, and delivered in the form of a fancy ceremony, and the uprooting of a young, promising life from the comfort of home, to be transplanted as a symbol into unfamiliar soil, among unfamiliar people and unfamiliar customs, to eat unfamiliar food and sleep in an unfamiliar bed.

The execution of such barbaric arrangements could have been enough (and was enough in many other documented cases, and understandably so) to send the princess’ grandmother into a spiral of deep depression, or a deranged mania, or worse, an uncontrollable vacillation between the two.

But she was for having none of that.

Her ken was of the deep old ways; ‘chieftain’s daughter’ more than ‘princess’ was likely her appropriate title. The sere conditions of her younger years meant that her self-esteem, much like her posterity’s, was based on her capacity for action, and the certainty that no task, monumental or minute, was beyond her ability. So, after she was bartered away in what proved to be a successful attempt to solidify the reputation of a small group of outlying islands, she arrived in her new home, a humble approximation of a castle in the hinterlands of the Ebudaeans and set to work.

In the ten years between her marriage and the birth of her daughter, she had done more to improve the conditions and consideration of the archipelago than the ten generations of men who had come before her. She was considered remarkably even-handed by those who worked for her, though her attention to detail left no room for error—talented chefs whose original recipes eventually saw interpretations in the most fashionable restaurants on the continent had often been promoted from within the lowest ranks of the scullery, but wealthy thatchers whose inherited mortar mixture had been too-often spread too thin onto leaky roofs soon found themselves facing the prospect of forcible remuneration, or worse, revocation of their licensure.

Even the lopsided parody of a castle soon came to be a point of pride. Honest stonemasons and that small segment of thatchers whose mortar was actually worth a damn worked tirelessly to renovate the sagging fortress, a room and a wing at a time, until that Stay’s façade rivalled that of wealthier, more bountiful places’ seats of authority.

Only one detail remained, hidden within the recesses of the royal corners, that would have tied the newly popular and cosmopolitan island kingdom to its not-so-far-off roots—a chamber that the queen insisted be dug out of the earth itself and never finished. It was there that she would retire, to her oafish but exceedingly satisfied husband’s chagrin on frequent occasion, rebuking his cajolement and brutish but charming attempts at romance with the simple explanation that she had to go make her orisons and duties—after all, hadn’t things gotten much better since she arrived? And since they had, and since he loved her, in his way, for all that she was, he relented.

It was then that she went to talk to dragons.

Dragons are not, as frequently assumed by the uninitiated, ruthless, hoarding predators with little on their mind but food and treasure. They are, in fact, exceedingly sentient beings, with ripe imaginations, whose existence is predicated on an environment that produces abundance, that is healthy enough to prepare a hoard in excess of its own needs. The princess’ grandmother knew this, from her initiation into her tribe’s mysteries as a young one. She brought with her a tiny spark of an apex protector, to the Ebudaeans, and nurtured it into something much greater, through the honesty of her give and her take, into a companion as indebted to the realm as it was responsible for it, and with whom she held communion with bare feet and bare hands on bare earth.

But her husband’s advances could not all be staved off, for she loved him, too, in her way, and soon she was with child. And in a blink, her child was born, and raised, and grown, and married away, to be planted, still a sapling, in the name of the Ebudaeans, for the first time ever on the lands of the continent. Luckily, the husband-to-be was kind, and handsome, and his kingdom was healthy, and happy, and abundant. There was no need for the dragon of the isles.

And things went as they did in their course, quite happily, and eventually thrilled with the ongoing results of racquets by match as an alternative to the old ways of bonking sword hilts on helmets in the arena.

But they say that the sight skips a generation.

And whether they say it or not, betrothal of humans to other humans without their consent is no way to abundance.

Thus, during a long day at courts, upon hearing the news that she would soon be married to some foreign master of a foreign Keep, the fundamental princess in question famously served a quoit directly into the face of her opponent, the wildly unpopular Comtesse de Slainet, on the latter's vocal approbation of “such a marvelous match.”

Though lionized by the local rag-sheets for her action, and the event heretofore becoming known in racquets infamy as “The Marvelous Match,” the princess nonetheless was deeply affected. In the scant months before she was to be whisked away to an unknown Keep, her smile faded. Her appearances on the clay were uninspired in defeat, and gleeless in victory.

For she had been confronted by an Absdragtion.

She had been sure of herself, the only child and loved therefore the most regardless of her gender. She had been adored by the crowd, buffetted by joy because of her position. She had only ever given her all, and it had always been enough. But somehow it was not enough; her people, her parents were willing to send her away to some beef-eating inland province and keep the slimy, snobby, broken-nosed Comtesse.

“It’s not fair,” came a voice one night while the princess’ face was swollen red and sniffling.

“No, it’s not,” said the princess, by reflex, without realizing who she was talking to.

“They don’t take you seriously,” said the voice.

“They took your grandfather seriously,” the voice suggested, taking a position around the room that seemed to be circular.

“Yes, but he was a man. They only ever saw me as a stupid cow to go have stupid calves in some stupid Keep for some stupid King, all because I was born this way!”

“I... I don’t know. I never wanted to be entangled with all of this. Being royal is ridiculous! I’d much rather just get my feet muddy on the clay on a rainy day than worry about knights and invaders and who married who.”

“Of course you would,” said someone, their voice coming closer, but as if in an embrace, instead of directly into the princess’ ear. “It’s the idiotic pride of men that would be the end of us all. Just ask to take the sword with you, a memento of home and a marker of your heritage. We’ll use it to be done with this foolishness sooner than later, dearest.”

“We.. We will? We will.” The princess wiped her nose as her toes touched the stone of the castle floor.

“Every repetition of this foolish cycle, I wish that humility had taken my hand. Instead, I took up arms against what I perceived to be an injustice. Knowing what you know, my pet traveler, and knowing that knowing the name of a thing gives you power over it, what would you name the Absdragtion, my temptation, the wrath of the isles?”

B. Tuniocre Calot, the Foul