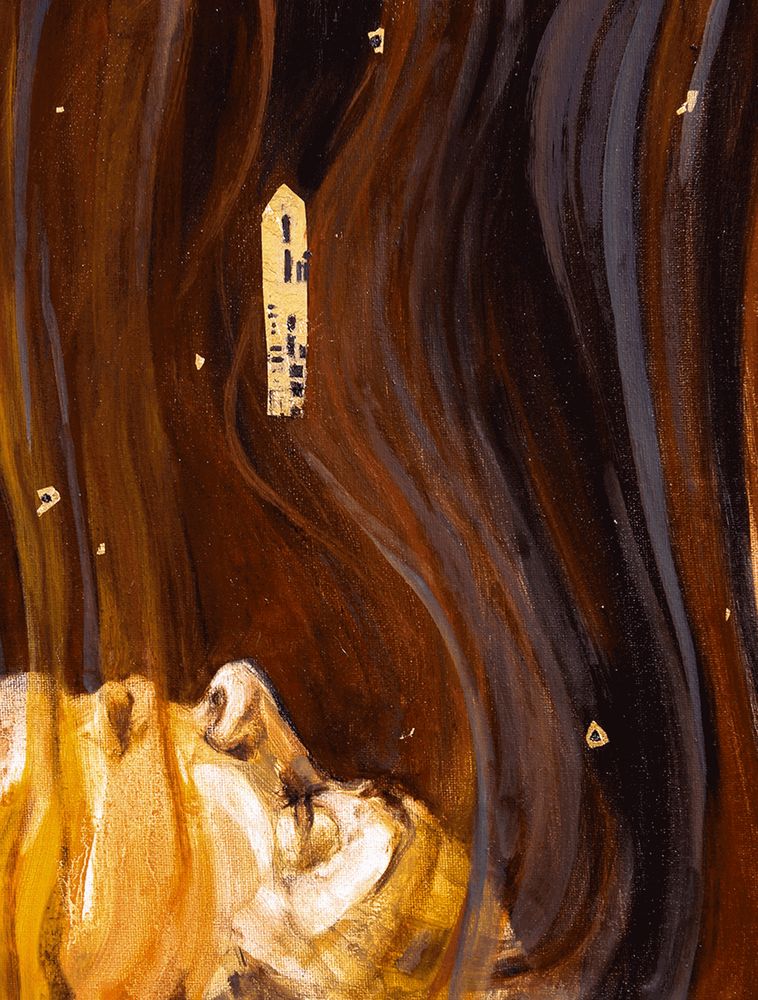 It’s a dark, hot world that you find yourself wandering through, without direction. The sky lays heavy and low, unnaturally close to you. It is the bizarre shade of dark,   dark blue that you’ve only seen on Earth Prime in the breathless moments just before the most violent storms.

Flashes of light scatter unpredictably across the sky, and illuminate the outlines of the thick layered clouds of something which blanket the space above. Electric red and orange light interrupts the consistent matte blue and reveals the red rocky terrain of this strange world in unpredictable bursts. The shock of the contrast leaves your eyes reeling and blinded in their frantic attempt to adjust.

Through your light-splotched vision, you see that the red ground slopes gently upward in front of you, covered in coarse black grasses and dotted with enormous crystalline boulders the color of blood. Their pigments glow dully even under this perpetual, stagnant black atmosphere. You can’t imagine what force could have scattered something so heavy across the hillside, and the balmy, stagnant air begins to feel smothering. You’re suddenly reminded of hiding underneath the covers as a child, your own warm breath hanging in the air around your face as you struggle not to breathe, lest you give away your whereabouts to whatever terrifying experience exists outside the safety of your quilt… you wonder why.

A singular, unexpected ping pulls you from your thoughts as you raise the dimly glowing screen of the Portarray to your face. A faint green spot appears just  ahead of you on the screen, so you dutifully begin to ascend the rocky hillside in pursuit of the energetic inconsistencies that first brought you to this strange place.

The terrain becomes rockier as you approach the summit of this low, wide hill. Boulders both large and small become more plentiful, and the rough brambles and feathery black grasses grow more and more sparse as the ground angles ever upwards. Eventually, you find yourself climbing awkwardly up a steep wall of massive quartz-like red stones that are warm to the touch. Eventually, you heave yourself over the top of a flat shelf of rock and find yourself at the summit of, what you now realize, is not a hill, nor a mountain, but a colossal hole in the surface of the planet. You only know to describe what you see before you in Earth-Prime terms: as some type of volcano.

The Portarray begins to chirp excitedly as you take in the site before you. The entire precipice of this landform is concave like a massive crater, the surrounding land descending towards the dark pit within the center.You hold the screen to your face   -  this is it.

You begin to scale down the rocky slope, carefully choosing to place your weight on only the most stable rocks which can support you without tumbling beneath your feet. You succeed less than half of the time, and mostly slide down the graveley decline feet-first and on your back. When you finally land at the bottom, just a few meters from the mouth of the cavernous pit, you’re startled by a quick burst of laughter, and are surprised when you turn to the sound to see what appears to be a human woman, standing casually at the lip of the volcano.

Her age, her face, her clothing, all indiscernible through the wavering filter of hot air which shifts her form continually like looking across a hot field of asphalt in peak summer heat. For the first time, you realize that the air is no warmer here than at the base of the colossal volcanic-vent. Only the same ambient temperature and pressing humidity fills this space, stagnant and equally warm as your own body. You're suddenly aware of how, just a moment ago, when your breath hit your wrist as you held the tracker to your face, you felt no change in temperature. Only quiet, static pressure upon your skin…

Her arms are crossed upon her chest and full of dozens of pieces of stone, each piece reflecting the limited light with a tint akin to the blood-stained red of the terrain. Their surface is solid, however, and lacking the crystalline quality of the boulders that reflects the flashes of light so unpredictably. Etched upon each jagged piece, you see, is some sort of rough carving… slashes and chips  which create patterns just slightly too measured, too orderly, to be the unintentional results of meaningless chance. No, you could recognize this even without your training, or the now frantic chittering of your Portarray. This is language. Ancient, and powerful.

With a smirk, she turns and runs fearlessly towards the edge, and jumps. Her body launches forcefully over the drop as she spins, throwing her arms and possessions outward as she leaps, twisting her body around to face you in midair as she descends.

You gasp and wince, your autonomic nervous system flooding you with panic and sending your breath plummeting directly down your spine. But, she’s smiling. She is completely peaceful and her beautiful hair glows and blows in waves around her, blue and burnt berry, copper and pomegranate. All billowing upwards from her as her arms fan outward like wings, and she falls in slow motion into the depths… slowly, slower, now just barely…until she hovers steadily above the emptiness, supported by only a gust of weird ions carried on a strange wind. Beneath her is an empty pit, so dark that it seems to have its own healthy gravitational pull inward…but nothing, not her, not any of the cracked glowing pieces of the ancient shattered tablet falls into its depths.

Spinning around backward, she has jumped blind onto some kind of an invisible cloud without thought or repercussion. She lays upon the air itself, as if supported by a fountain or gust of imperceivable wind.  Like a giant vent, like skydiving backwards, everything hovers in perfect shuddering alignment. Not weightless at all, but rather, heavily balanced upon an equivalent force, pushing back against gravity and letting her lay upon the upward thrust of air as if supported by invisible shifting matter.

And most importantly, as she floats peacefully in swaying motions like a kite above the gaping mouth of this volcano-shaped hole in the…(planet? you wonder,) she smiles and lets all of her treasure float freely, scattered around her like flotsam and jetsam in the eerie calm after a hurricane. Each piece falls magnetically, naturally, into its own place around her as if in orbit, and hangs in place. The rough-hewn runes on the broken pieces begin to glow, but the “light” which emanates from each character is, somehow, glowing black.

She invites you into the pit and promises to give you a shard of the tablet, which will provide enough energy to return home… but you don't know which verse you’re in!

If this is Proxima, then you are in a place with different laws of physics than your own, and so if the ions support her seemingly human weight, they’ll probably support you too.  But if you’re in Fantasia, she could be a being of completely different composition than you, on a physical, existential level… meaning the laws which apply to her physical body and allows her to swim upon the vent may not apply to yours.  And if this verse belongs to Gloom… She may not even be real, or genuine, at all.

A: Don't jump! Find some boulders to test the phenomenon with. Ask to scan your new friend to understand her physiology. The situation must be fully understood before taking significant risks.

B: Trust the floating woman and jump! Enjoy the freedom of the sky and frolic in the air with your new friend!

C: Ask questions! From the safety of  the top of the volcano, ask her how it works! Ask about the runes. This person knows a lot, and you want to learn!

D: Begin taking measurements to figure out how to install some kind of machine to make power from this phenomenon. Ignore the invitation of this person, the Initiative desperately needs energy.

[Archeo-Teleo Linguist Analysis: There was not a cohesive psychotype found among Para Initiative agents.  6 favored leaping without looking, 4 favored an inquisitive discourse, while 2 thought that the energetic phenomenon would be of some use to help the dangerous energy shortage the Initiative is currently facing.]

The flashing lights in the sky recede further and further above you, growing smaller as you plummet deeper into the pit.  You can see her, now, drifting slowly down, following you, staring on.  You try to yell at her, but the words are lost with the rush of the air.  Down and down and down and down…

The Portarray! you think, you can trigger an emergency activation of the Sieve to return home.  You will yourself to reach for the device, when you realize your hand has become stone.  Something is changing about you as you fall.  Where once you were flesh and bone, you have become a sculpture of yourself, made of red stone.  Of course the air could not have caught you, you were always this heavy stone, falling down and down and down…

Finally you hit the bottom and shatter. Broken into 1000 pieces. The statue is broken. The story binding you to this form sundered.  And you are free!  Finally!  It felt like 1000 years!  The broken shards, inscribed with ancient writing, the words that created and bound you in your human form, slowly float, rising from the ground.  You lift further and begin to fly, moving through the air as you will, gravity means nothing to you.  That story is over.  You are a new thing, a thing that is free.  Joy surges through you.  You wish to return to the woman who helped free you, to fly together and frolic in the air.  You ascend, up and up and up and up…

[SHK-E Assessment: Leaping out over strange terrain did not give much consideration to SAFETY. A member of the Para Initiative has been lost, and many cycles pass without any communication from them. The bold, trusting, costly, and sometimes risky attempts to forge connections by the Para Initiative have not gone unnoticed throughout the Verses.  Everywhere The Initiative has become synonymous with a helping hand, trying to build mutual understanding, and a warm HEART.]