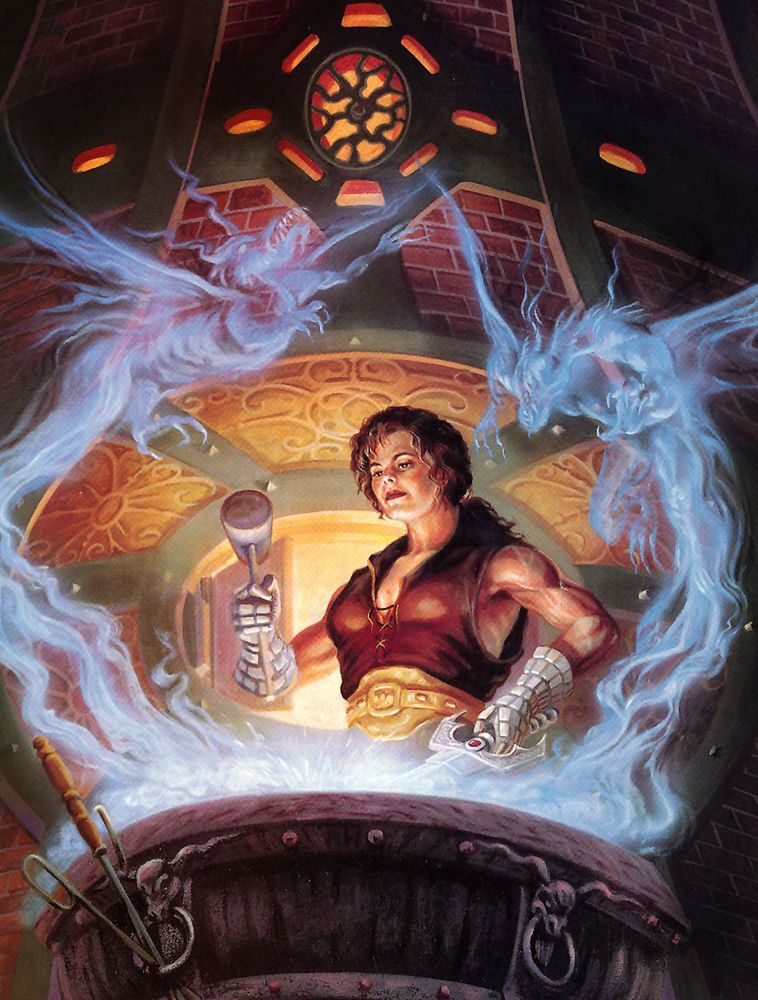 “First, and most likely, a lack of discipline at the forge. Granted, some do seem to have a gift for  the work, but nothing, not even if magic was real, nothing makes up for a sense of purpose. I saw an  apprentice, who couldn’t smith a dagger for an Aq-Shabari child, make the most exquisite soup spoon  just as soon as she finally got the chance. Nothing magical about that; she just wasn’t particularly interested in stabbing. Must have been particularly interested in soup, probably feeding soup to the lunkheaded Journey-craft who kept assigning her to make daggers, I’d guess. I think they ended up married.

“Second is the inability to listen. That’s what sets the great ones apart from the good ones,  even. Metal’s got a mouth, and ears, too. And it’s been around a long time, much longer than you and  me, traveler. It’s heard some things.

“Maybe, time was, there were great beasts with razor sharp claws, and giant teeth, and wings to fly with blazing speed as the Geo-Logicians claim. If that IS true, though, the metal was there before, and it’s still there now, same place, just waiting to be dug up. Just sitting, listening, absorbing the vibrations, and keeping a record of them. And when you heat it up, when you bring it to life, and you put the touch of the instrument to it, you can hear that record if you put your mind to quiet and listen.

“I’m inclined to believe the Geo-Logicians, for what it’s worth, traveler. Cause I’ve heard such  songs and stories when I’ve been in the dance with the blaze. Ser Massquis’s blade that’s said to shred  plate like paper? That came from this forge, it did, and it sang, hell-hot loud and fury for the nine days it  took to bend it into shape, sparking purple and bright white, a screeching, piercing cry. Metal that knew dragons, or at least their juniors..

“The spade that buried the great peacemaker Ashla Leão? I cast it from the lodestone his hand  rest upon when his brother betrayed him. I wept full forty-eight hours forging, the heat of the furnace  leaving salt crystals on my cheek as my tears turned to vapor. Not weeping for the man, you see, for I  never knew him, but for the mournsong the iron lowed, for it knew him. A dirge the likes of which the  choir of his Gossamer Tabernacle couldn’t imagine.

“I’m sure Good John Cooper down the lane could wax poetic about his barrels, too, and far be it  from me to say trees don’t listen. But trees are young, just as young as us, mostly, and anyway he only  soaks their bones and bends them. I’ve more in common with Wez, that rascal of a bard. Drunk he may  be, and loose, but he keeps his mouth shut when he hears a good tune, and can play one too, and waltz  with a partner. He’d never make a good smith, of course, on account of his sense of purpose, but he  does know how to listen.

“But I digress. Point is, there’s no such thing as magic. But there is such thing as stories. The  best ones we never forget. And the metal, it’s like us in that way. If my craft is better than the rest, it’s  because I respect my materials, and take them serious. I’m dedicated to this forge, traveler, my life and  limb. I trust the metal to say what it has to say, and I listen, and dance with my forge-arm, my strikes with the hammer, my grasps with the tong.

“The metal’s too cool, now, and I’ve spoken too long.  Be along if you must, but, if you’ve time, and you please, then stay for a song.”

As a solo operative investigating the reports of supernatural weapons appearing on this low-tech outer valence world on the Rim, you’re disappointed, but not surprised, to discover that it is just a savvy approach to smithing that has created powerful bespoke pieces, right in line with what you’d expect in Synthex. The mission is already a simple success, though not an exciting one, because it closes an investigation with no loose ends. Still, you could manage some additional upside depending on how you proceed.

A: Accept the open invitation to observe the skilled smith at her work? You already trust that she’s telling you the truth of her perspective and experience, but seeing is believing. It’s also a rare opportunity to see a master craftsman working by hand, almost unheard of at Delphi with its tech conglomerates and massive forge complexes.

B: Ask where you could find out more about the Geo-Logicians and their theories. It sounds like they are participating in proto-scientific attempts to explain some of the phenomena of their world, and the cultural scholars on Delphi are always interested in this kind of historical information. If this world reaches breakthrough on the back of their work, this knowledge would form a complete Archeo-Teleo link.

C: Graciously take your leave and seek out Wez the bard. He may have a better understanding of where the rumors of magically enchanted weapons came from, and may even have had a hand in it himself as a storyteller by trade. The smith also mentioned that he is a good listener; the combination of his profession and that quality make him a strong candidate for being in the know.

D: Ask for information about the origin of the metal that made Ser Massquis’s blade. While her understanding of her materials may be right in a pseudo-scientific way, chemistry doesn’t make mistakes. There could still be external forces interfering here in spite of the fact that the smith’s beliefs are earnestly held and openly shared. Then again, it could be nothing but some inclusions that turn out to be a dead end.

[Archivist's note: 8 preferred staying to view the Blacksmith's work, 8 thought it best to find the Geo-Logicians, while 2 each favored finding Wez the Bard or information about Ser Massquis' blade.]

Since it seems that you’ve learned all you can here, you decide to seek out these Geo-Logicians to gather what information they might share.  This would pad out your report nicely, hopefully making the whole endeavor more fruitful.  A full Archeo-Teleo link with your name on it could really boost your advancement opportunities back home.  The forger points you in the right direction and you move on with gratitude.

You’ve only walked along for a few decime when the Portarray pings.  You came here by Sieve and there’s been no indication of any natural portals or unusual energies in this area, or even that there might likely be on this world. You open up the case to look over the display panel, and discover that there’s some indication of unusual, possibly extraversel, energy nearby.  In fact, according to the readings, it’s back the way you came!

Hurrying back gets you surprised looks from the locals, but it’s all you can do not to run full out.

When you get back to the forge, the metal which had grown cool glows once again with heat.  She moves the material to the center of the flame and leans forward… to listen?

Her expression would seem more appropriate on a teenager huddled together with friends sharing a secret.  Her mouth is curled in a sly smile and she laughs a little now and then.  Moving the block so that she holds it at arm's length with her left hand, she strikes it gently with her right saying, “You’re a brazen one aren’t you?  Full of lively tales and bold adventures.”  She strikes it again and hums, testing notes against the resonance of her hammer against the metal, as if it were a tuning fork.

When she seems satisfied with a particular key she tests out some patterns of notes until her eyes light up with an unspoken, Aha!  The Portarray also lights up to indicate a burst of whatever energy it’s detecting at this site.  As you listen, you think you hear a note of reply from the stone, very faintly, and gone so quickly you aren’t certain it happened.

“Yes,” the blacksmith says to the stone, “we’ll be good friends, and we’ll have plenty of time for you to tell me all that you wish to share.”  She sets the stone back in the heat of the forge then, and begins to sing.  At first the song is just short patterns of notes hummed in bursts with her listening in between each one.  By the time the metal is hot enough to work you catch the occasional, very faint word in between the melodic refrains.

These little whispers of fragments most enticing dance past your ears, like something playing at the edge of your vision, yet always just out of sight.  Then the forger takes the block in her tongs and begins the methodical process of beating it into a new shape.  When the hammer hits the metal the sound reverberates throughout the smithy like a musician in a concert hall.  The hammer keeps time while the metal sings and the smith joins in.

Sometimes she sings without words, sometimes she sings a piece of a story, and still she listens periodically like a bosom buddy from her youth stands before her and they’re laughing together.  People walking past suddenly smile or laugh, as if recalling some past delight, when they look up at the forge and continue on their way.

You’re mesmerized by the most unscientific science of her work.  She’s precise and highly skilled to be sure, but clearly there’s more going on here than she is willing to acknowledge!  You remember in time to turn on recording mode and engage every sensor you can.  This visit and subsequent report may be far more crucial than just an Archeo-Teleo link.

[SHK-E Analysis:  The Initiative spent a small amount of ENERGY making records of the Smith's techniques and analyzing them to understand the phenomena at play. We gained a small amount of KNOWLEDGE about how the smith's work was manipulating Versal energies. There is much more to learn!]