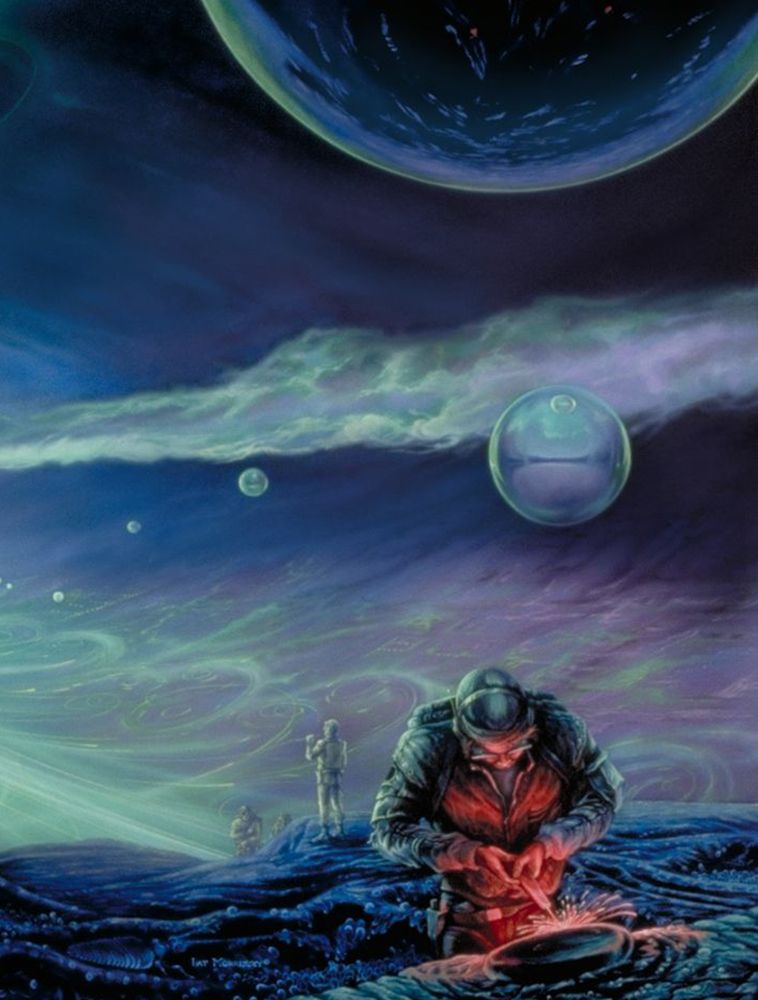 Traveling the Verses doesn’t come naturally for humans - or for many beings at all, for that matter - and the cost in energy necessary for the Initiative to continue research is no small consideration.

“As you know, the Portarray technology alerts us to inconsistencies within an individual Verses' median energy signature. No one’s sure which Verse this place is part of, but it’s full of outlier energy readings.”  This cluster of asteroids has been one of the most prolific and fruitful energy mines for the Para Initiative.

Miners settled here since the first days Sieve operations have been one of the backbones of the Para Initiative's joules.  With its oxygen-rich atmosphere and mild temperature, survival is possible in the long-term, and the planet is rich in energy deposits embedded into the surface itself. With no natural life forms on this large barren rock, there is no competition for the wealth the land holds. The resources are plentiful, and there is no end in sight for what could be derived from this desolate place. You’ve been asked to evaluate a massive expansion here, which could see thousands more miners settling onto the opposite hemisphere to establish several more extraction sites…

If you report back that it’s safe.

The manager of this specific operation speaks proudly, projecting his voice above the heads of his audience as he explains his lifes’ work in the grandest of terms… You feel grateful to witness this moment, because it seems to mean more than a great deal to your guide.

“This is the most effective method we’ve developed to pick up the kind of unusual phenomena that’s worth documentation… but that’s not the only reason we rely on this kind of tech. Just so happens, that the most potent sources of usable energy are found at these same locations where the layers of Verses seem to touch. “

Baaqir gestures outwards to the general chaos around you, towards almost one hundred and fifty humans working diligently (and unpreparedly, you think) on the surface of this hurtling rock.  From each shuddering crack bleeds forth a metallic, weightless liquid which leaks from the rock in floating drops. Like mercury without gravity, it rises out from the surface and floats unceremoniously past the goggled faces of the miners, past the steep jagged walls of the quarry where they congeal into perfect, floating orbs which hover above your heads beneath the mirrored surface of the gaseous atmosphere. The perfectly spherical masses of liquid reflect the bursts of light from the machinery below as they drift along the atmosphere, growing large with each drop until the energy within the liquid can be used to fill the Initiative’s battery cells.

Green sparks fly from the cold blue rock. Miners chip away jagged shards with each of their personal lasers, atomic destruction wielded so casually.... The rocks do not splinter easily, and let shrapnel fly rebelliously towards the humans’ gentle, delicate eyes. If you didn’t know better, you’d think the planet aims each sharp piece just so... which bounces from the protectively placed adamantium visor, but cascades into the rest of the ore and encourages more and more vicious rocks to careen towards the unsuspecting foreheads of these sitting ducks. The stone chips ricochet and clatter across the ground before you.

You need to get these humans out of here - they don’t belong on this surface, you think.

Jovially, your guide continues, “The best working theory at the moment is that these energy deposits occur at the sites where the fabric of space is weaker, and things can get fuzzy, and maybe even cross over. These places aren’t controlled or all that safe, they’re organic, raw… Untamed. I think of it like, the portals are button-holes in the fabric of space-time, cut cleanly with a sharp blade and hemmed on the edges. But places like this… it’s more like when you’ve worn a hole in the knee of your denim from sheer friction and persistence. Rough edges, irregular shapes and no clean borders.This is the portal wilderness….. Don’t quote me on that, it’s just my understanding, you know.”

You’re grateful for the comradery, because the sheer volume of this entire operation has left you completely overwhelmed and out of place. Miners with their glowing red lasers and complete lack of fear dot the jagged cliff sides surrounding the ravine.  They move calmly beneath the immense pulsating mirror image of the planet that looms above their heads, the rippling surface of an upside down ocean reflecting the surface of this hurtling meteor.

A bit of glare pulls your gaze to your feet, where a fist-sized shard of cold rock has skittered to a stop against your boot. You reach down and lift the small shard to your face, transfixed by the complex network of dimly shining green veins which weave through the rock. Like tree roots, like lightning strikes, like infantesimal threads tangled into a million random shapes… or, perhaps not so random? The patterns almost look like writing, or hieroglyphs of some kind... words?

You become suddenly uncomfortable, but you can’t say exactly why. Your fist closes tightly around the rock, instinctively. As you stare out into the ravine, you begin to count the small figures crawling upon the surface with their lasers, harvesting mere handfuls of energy.

You find your mind wandering over how such a big risk is taken, for each individual one… and for how much? What will the price of their toil, their lives fetch? How many batteries will that even charge, what will they even be burnt for? A single missions’ worth of fuel?

A voice echoes eerily in your eardrums, buzzing like tinnitus:
“It’s infested,” you cringe as you hear your mind’s own self-narrator say it. “Absolutely crawling with miners,” you think, with a twinge of guilt at the readiness with which you described your own peers as nothing more than clamoring ants on a scrap of food… carving out every nook, collecting the slightest bit of nutrition, energy, to carry home excitedly without the slightest awareness of the great plan working above them all, you all, how manipulated you are…

You snap forward, eyes re-adjusting to your guide’s face, now concerned…How many of these are truly your own thoughts?

“So,” says Baaqir, snapping you back into the present, and the pressing issue at hand.

“What do you say? Do we get the green light to take this operation to the next level?”

A: Sounds good to me. Energy is too vital a resource to sacrifice just because some weird rock gave you the heebie-jeebies. After all, things are always a little strange when you leave your own Verse, and this is nowhere near the eeriest thing you’ve come across…

B: We need more time. This is above your pay grade, but you know when to admit it. You need to call in experts. It’s going to take a team of Initiative agents more skilled  than you to properly research what’s going on here before anyone can say whether this project can be expanded, or even continued. Cease operations until this planet can be properly researched.

C: Don’t rock the boat. Things seem to be going well enough…. Steady output, and the workers seem happy enough. Maybe we’ve lucked into the right balance, but any expansion could be unsustainable. Better not overwhelm whatever kind of sentience might be here.

D: Hard no. In fact, something is going on here that needs to be dealt with before another drop of power is harvested. This place is dangerous. Full stop on all proceedings, and evacuate.

[Archivist's Note: By a margin of 5 to 3, those present thought it best to take time to study this place rather that green light the expansion.]

You shake your head, partially to let Baaqir know the answer is "no", and partially hoping it might clear it of the intrusive thoughts.  Your guide looks deflated, as if you had thrown the slice of cake he was about to eat hurtling into empty space...

You wonder why such a cruel thought would cross your mind. You would never do that to someone's slice of cake!

It's not until months later when you read the reports of the Knowledge Core Versology team and their Safety Ethics Assurance attaches that it becomes more clear:

Preliminary theories were that the planetoids exist at an intersection of Synthex and Gloom. Reality presents the Synthexian paradigm of space, technology, and travel. However, the "jagged rips" that Baaqir was talking about seem to be channels for malevolence from Gloom.  SEA's assessment is that the propensity for accidents and collisions with debris and other undesirable events are several standard deviations above what their actuarial tables would predict.  Further analysis showed a pattern of increased aggression and conflict between the miners posted here.

The Archeo-Teleo Lingists sent for Emilia, hoping both her experience with various Gloom Verse missions and the Sight might help better understand what's at play here. She examined the rock with the seeming-writing on it carefully, without touching it.  Her report was that when examined with the Sight, it looked to be part of a powerful curse.  When she performed auguries and divinations upon it, it became clear that it was a little piece of the mind of this world.

You read that again to make sure you got it right.  But, the report says the entire planet was conscious, and its only wish was to cause harm.  It's energy, apparently, was being offered freely as some kind of bait for the miners to stay and put themselves at risk.

You skim to the end of the report, ignoring many technical details and incident forms...

It looks like ultimately the Para Initiative decided to continue operating at the site with a mitigation plan put into place by Safety Ethics Assurance. Wards were added to the miners' headgear to protect them from mental influence by the planet. Protective glyphs were used on work sites and work camps to counter the curses promoting accidents and mayhem. Chromatography is now performed on the silver liquid to separate the pure energetic layer from the malign layer.  The separated fluid is considered hazardous waste, and transported back to Gloom where it can, presumably, cause not more harm than the native ambiance.

You scratch your head.  Apparently the planet is considered a consenting party to being mined, as it holds out hope for miners to get complacent and hurt them when they let their guard down.

You put the report away, and are glad you made the call for someone to look into it.

[SHK-E Analysis: It cost the Para Iniaitive a large amount of ENERGY to suspend operations at one of their most important extraction sites to study what was going on on the planet. Thankfully, with that understanding come improvements to the SAFETY of the operation, greater KNOWLEDGE of Verse intersections, and the miners take HEART at how much better things are with the new protections in place.