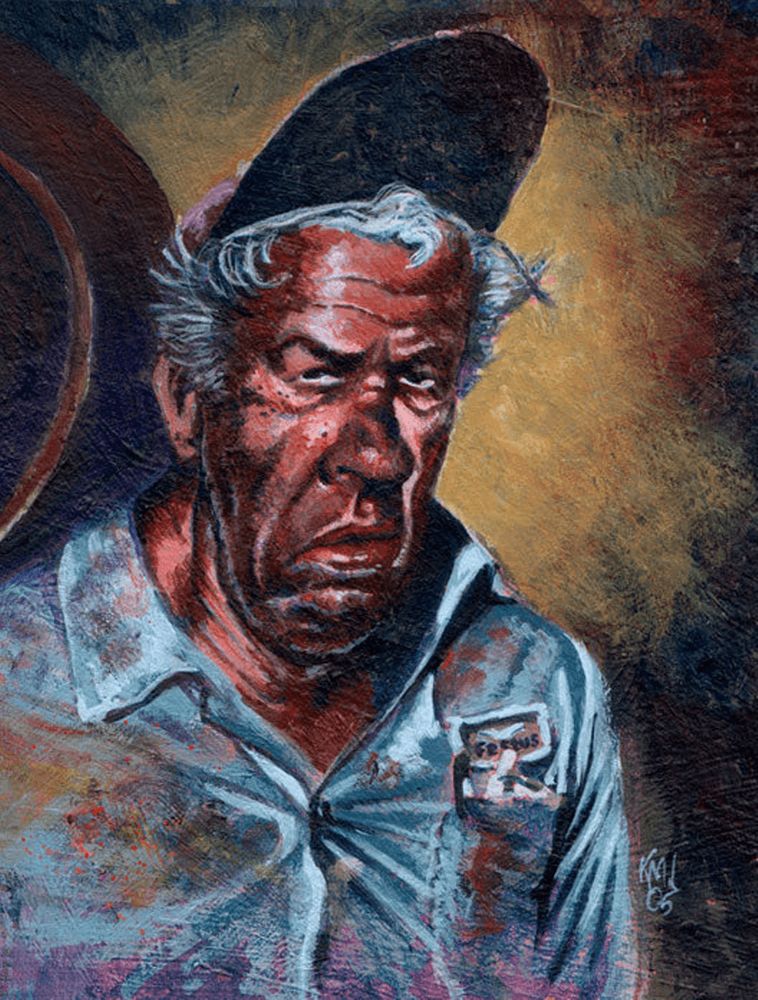 “Now, kid. I know you think you can waltz in here and just get the bare bones of your story fixed. Trade a few spiderwebs and moonbeams for a used punchline, put a cheap shine on your denouement, slap some patches on your plot holes and I don’t know what else. And a story like that’ll run, sure. But, kid, I’m gonna tell you right now - it ain’t worth your time or mine if you’re not gonna invest in the good stuff.”

“I see folks come in here every day with these worn out stories that they got from their parents, and their parents got ‘em from their parents, and so on, and so on. People who’ve been riding the same story for generations, repeating it the same way, as if they never heard it before, as if they’re gonna be surprised by the ending. Never fixing what’s broke, never greasing the wheels with anything new, just recycling the fear and the tears - kid, let me tell you, it ain’t no way to ride.”

“Not to mention the worst cases, I mean every so often we get folks in here who can barely tell the difference between the story they’re telling and their own selves. Folks who’ve been looking in the mirror and seeing the same story play out over their features every time, regardless of what’s actually changed. Folks who live so deep in the machine of their stories they got blood between the gears, they got motor oil pumping through their own hearts… it ain’t pretty, kid. Not pretty at all.”

“Now, look at this story you got here. It’s got some nice elements, but you’ve muddled up everything from the start with this multi-dimensional in medias res, and the components joining it together don’t even line up - you’ve got a metric character with an imperial worldview, you’ve got megafauna doing microaggressions, you’ve got polylingual monologues and monotheist polyclones - your narrative structure’s practically ready to collapse, and I don’t even want to think about the bromide emissions or the irony footprint. You need serious overhaul here, kid, and fast.”

“Now, we can fix this for you. Get that story engine running smooth, tie up all that nonlinear exposition, upgrade these stale allusions with some real top-shelf stuff. We can fix you up a tale that’ll be worth taking out a loan on the next generation, just so you can read it to your grandkids - but like I said, kid, it ain’t gonna come cheap. Now, of course you can get a second opinion if you want, no one’s gonna stop you - but frankly, I’m not sure you can make it to the next garage with this wonky metaphor intact.”

Festus isn’t wrong that the ride’s been a little bumpy since you, dear reader, crashed through the fourth wall of your vidscreen during the post-lunch coma brought on by your ill-advised indulgence in your favorite from Dottie Yoo’s. Voting for choices, reacting with heartfelt commentary to the stories that came across your desk, that was easy, and it helped the Initiative out, too. It’s more than a little different when you’re in the driver’s seat, though, especially on a project with the kind of scope that covers all the bases in all the Verses.

What you really need to go explore this intertextual space is a reliable idiom to get around on, relatable but not melodramatic, playful enough to be deadly serious, and serious enough to engender play. After all, the most important element of any vehicle is that it takes you and your passengers where you’re going. Getting there in record time, or in flashy, enviable style are just window dressing.

The Story Mechanics know their stuff, that much is clear, but you’re also sure that Festus might be overselling more than just a bit. You can think of a few options that might result in getting a decent narrative thrust out of this pit stop, but you’ve only got one chance to convince him that he’s dealing with someone in the know to avoid getting taken to the literary cleaners.

A: Ask about a conversion to a metered two-cycle. Iambic verse runs a lot more efficiently than full-bore prose, and poetic license gives you a lot of liberty on the narrative roadway to split lanes and even pop the occasional wheelie.

B: Mention that you know m3ta1-11, and ask about something in his style. He’s a self-proclaimed aficionado of the true classics, but his thrift store aesthetic can’t be all that costly. Great art finds a way, regardless of its means.

C: Discuss the potential of narrative power from the perspective of anthropo/sociological understanding. Your friends at Sanctuary have done amazing things with stories that haven’t had “upgrades” in generations. The classics are classics for a reason.

D: Drop a hint that you’re savvy to the differánce engine. Narrative bells and whistles, traditional forms and mythologies, even metatextual criticism itself– it’s all part of structure, sign, and play. Story Mechanics will benefit as much from you wearing their logo as you will from riding their devices. Let’s talk about price.

(If you’d like to vote on our stories, influence Verses lore, what happens next, game mechanics, and even future cards. Then join our Discord at http://discord.gg/verses‍

[Cartesian Chop Shop Mission Analysis - 5 Initiative members voted to address unavoidable reciprocity with Festus; 3 voted for the anthropological/mythopoeic approach to story, 2 thought it would be a good idea to mention m3ta1-11’s upcycled classics, and only 1 voted for a poetry conversion.]

You decide to have a philosophical tilt at a few of the things that Festus seems to be taking for granted, or at least that he wants you to take for granted.

“So, I'll defer to you, the expert, what would you say is the story's central problem?” you ask as innocently as possible, hoping that he’ll bite. And he does.

“Like I said, kid, the main issue is this wonky metaphor you’re trying to drive the whole thing with–a story about stories, but stories are vehicles? It’s a cute premise, but you’re never gonna get any real mileage out of it.”

You nod thoughtfully, and take a minute before you make your move. “But surely you’d say that the setting is more central than the metaphor, right? This is Commedia, after all, and wonky metaphors, literary devices, and even the occasional terrible wordplay are part and parcel of the Verse, right?”

“Yeah, sure, I guess so, kid, but that doesn’t change the fact that…”

You interrupt Festus before he can try and circle back around, “And what about the characterization? Surely that’s just as crucial to the production of meaning as the metaphor. If you’d been in any other story besides this one, you’d be pretty much the same. Gruff, experienced, a little world-weary, maybe trying to take an innocent customer for the proverbial ride, if you’ll pardon the pun. Evocative of a situation with a certain type of individual that we’ve all found ourselves in at one moment or another, yeah?”

“Hey, wait a minute! No fair trying to deconstruct me over there, kid. But I see what you’re getting at. You shoulda just told me up front that you were into semiology yourself. Coulda saved us both some time and saved me the sales pitch. For what it’s worth, I think the whole ‘multiple universes so there’s room for everything’ is a pretty solid framework, especially considering the goal seems to be actual free play.”

“From the literary perspective, that’s exactly what we’re going for,” you acknowledge. “But for all the freedom that the system allows, I can’t help but feel like even the most abstract and revolutionary stuff we’re putting together is just bricolage, pieces of this from here with pieces of that from there, stitched up into compelling patterns.”

Festus laughs a deep, hearty laugh at that last bit. “Kid, that’s just the curse of the creative. The anxiety of influence. Trust me, I’ve been to some spots in this place that would pose a serious hazard to a non-native like yourself; real raw stuff out in the wild. None of it’s cut from whole cloth, not even the stuff that you think nobody’s ever seen before. Engineering from scratch is just a myth. And not even a very good one. The best myths are mythomorphic, the ones about how myths are made, that scrabble in the very dirt they came from and spark the fire that lights their own way from here to eternity.”

“So, you’re saying that my ‘wonky metaphor’ might have some miles in it after all, huh?”

The Story Mechanic chuckles. “With me to help tune it up, it just might, kid. It just might.”

[SHK-E Analysis: Gaining the confidence of the Story Mechanics gave you access to the resources at their disposal to help the Initiative navigate the literary strangeways of Commedia, representing a type of ENERGY. Misleading Festus into a centering that you then turned on him wasn’t particularly nice, and deconstructing a character in the middle of their own story doesn’t show much kindness of HEART.