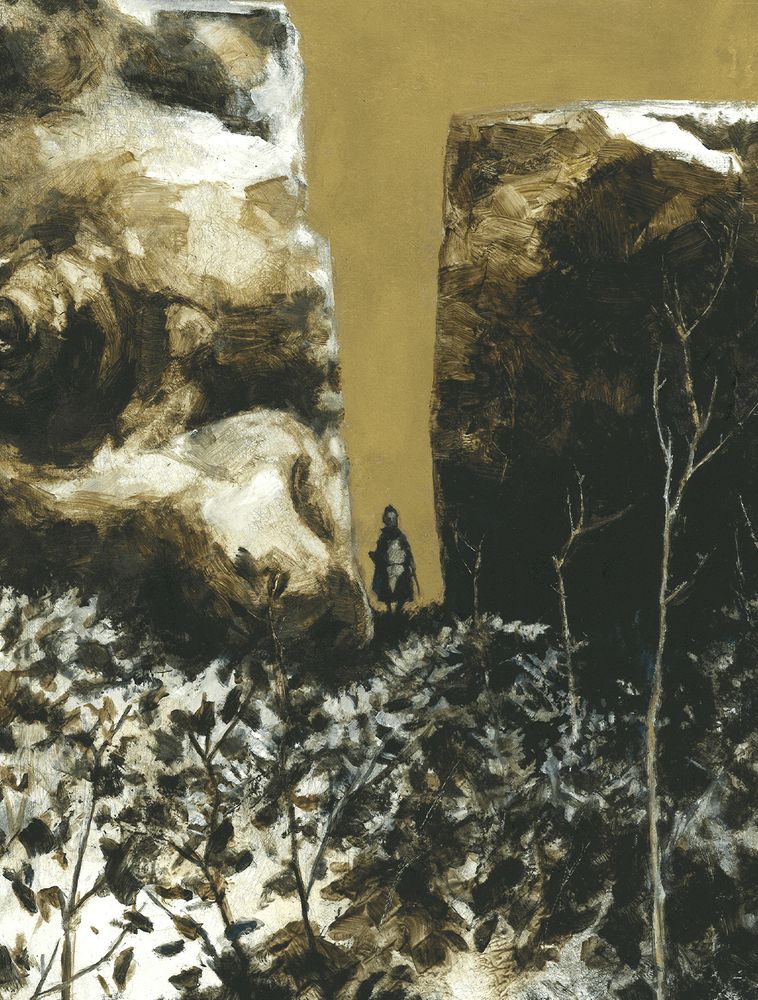 “How did we end up here? A fair question, pet, and one that surely has a thousand answers if you asked a thousand voices. All of the stories begin in one place, though, with one problem, one guardian, one Taciturn. Mine is no different.”

Roydice. The King’s Word. Celebrated by all as the embodiment of the divine right, the enforcement of royal will. Not just content, but eager to serve, to be the hand of the Law, an exemplar, the proof of the commitment between sovereign and vassal.

During the days in the light, Roydice’s accomplishments were innumerable. Bringing the truth of the Keep to faraway, savage lands by peace more than by sword. Illuminating the petty rulers of negligible hamlets with righteous, humble strength, compelling by example rather than word, finding kinship with the workers of the earth, the incarnation of just rule and its best possible enforcement.

But there was always something bigger.

It began as a small whisper, the idea that Roydice was a more worthy sovereign than the King himself; after all, it was Roydice who advocated for the people he touched on his missions. It was Roydice who shook hands, unafraid to sully himself with grime or toil. The King, in the Keep, far away, had no understanding of the realities of the daily struggles of his subjects, it was claimed. Roydice, at least, helped fashion plows from the confiscated scythes and daggers of the Outland invaders, defending the far reaches by hook, shaped into crook.

It was thus that jealousy stole into the court.

Where pride should have abounded, for the King himself won glory and fame through the deeds of his noble knights, instead rankle festered. Whether whispered into his ear by an uncouth, ambitious courtier slyly insinuating, or fated by the threads of destiny themselves, or simply one price of the weary weight of his rank and office, for heavy indeed is the crown, none can say. But jealousy, that worm, once rooted, grows, and twists upon itself, and contorts into worse than worms, into the very serpents of mistrust and wrath, and venomous betrayal.

And as it grew, so grew the court and the kingdom itself more grave and far less joyous. Bad luck seemed to find more purchase, though perhaps it was simply perception—for if one goes looking for trouble, then trouble they’ll find--but the King’s attitude did little to inspire optimism. And as the leader goes, so go his people. Where abundance and prosperity once blessed the land, feuds over boundaries began to happen, each citizen attempted to have more, to get more than his neighbors, viewing them as competitors rather than compatriots.

Roydice, for his part, kept on in his fashion, helping where he was needed, giving of his time and his wealth as he could. He felt it too, though, the cool distance taking root in a once-warm place. And he feared, as a good and just defender of the realm ought, that the enemies of the King and the kingdom would also take notice, and rally their cause to strike when they could. His admission of this worry to his closest friend, his sovereign, proved the first step in his undoing.

One day, a rare day when the King himself seemed to be in a mood of jollity, he spoke before his assembled court, directly to his finest knight, his most loyal servant.

“Roydice, it is said that you desire only to serve your King. Is this true?”

“Of course, my lord. I live to see your will enforced and your throne protected. I swore this bond to you many years ago and have striven only to see it through. I wonder, now, by your very question, if you have not had some cause to doubt my intent. I assure you, highness, my very life is yours to command.”

The King laughed, a mirthless laugh that gave the lie to the perceived mood of the chamber and brought an all-too familiar chill back into the air. “Hah! Your life? Is that all you would offer me, Roydice? So little, when I seek to build a kingdom that will serve not only these subjects, but their children, and their grandchildren, and their grandchildren’s grandchildren? A paltry sum against the ravages of time, one man’s life, do you not agree? Would you not see my shining realm protected for the generations to come?”

“I would, sire, and would that I had more than one life to give. Paltry I may be, but faithful and true, and stalwart to the end in your service, and the service of this land.”

“But was it not you,” the King continued, “who confided to me in your fear of a threat from the outside?”

“It was, majesty, though I fail to see how that calls my loyalty into question.”

The King’s voice rose, a tremble of anger making its way into his tone, “In saying, there is doing, Sir Knight! Have you no faith in the litanies? Our prayers reach to the heavens and by our words alone, we are blessed with divine protection. Your words of worry are a chink in that armor! By imagining our enemies to be able to come, you have made them so! Worse, you said it to me, the sovereign ruler of this place! As a rumor among the grog-besotten peasants in whatever tavern you post your muddy boots, perhaps it could be overlooked. But you have poisoned my mind with these thoughts of weakness! Your lack of faith has laid me low.”

“My king! It is not so! I said these words to you as a friend, a brother in arms, and a proud servant. The forces that muster against us would have come no matter what I said. Far better for you to know, and to prepare, than to be caught unawares. And even now, I stand ready to fight to my dying breath to protect you, and this place, though your thoughts of me have indeed laid me low this day.”

The king levelled his eyes. “Is that so, Roydice? And these invaders, when they come, will they come through the Narrowing Escape?”

“Of course not, milord, for it is high and tight, impossible to run supply lines through, and easily defensible. A single skilled soldier could hold the pass for days even against a foe of greatly superior numbers.”

The King nodded curtly. “Then it is there you will go. A single skilled soldier to defend against your imaginary hordes, when they come... if they come. You wished for more than your life to give, but give your life you shall. No more shall you traipse the lands making jest of me and spreading vicious rumors. Serve unto your dying breath, a sentinel to stand guard beside the giant’s headstone.”

“Milord, no! I beg you, let me serve where I will soon be needed! Do not do this to me, it is a fate crueler than banishment!”

The king’s gaze remained flat. “Come, knight, lean close to me one final time. Your bond of service in the high pass will be released when I speak this word to you once more, and not a moment sooner.”

A pair of tears rolled down Roydice’s face as he approached his King. Behind a cupped hand, a single whisper, and the knight turned and trudged out of the castle, sights set on the end of the road that is known as the Taciturn.

“And there he stands to this day, pet. Had you come to me by the high ravine, you would have had to gain passage past that poor creature. Luckily for us, you have other means of transport. For now, though, a riddle, one that not even I, with my part to play in this tale, truly know the answer to. What word did the King whisper in Roydice’s ear?”