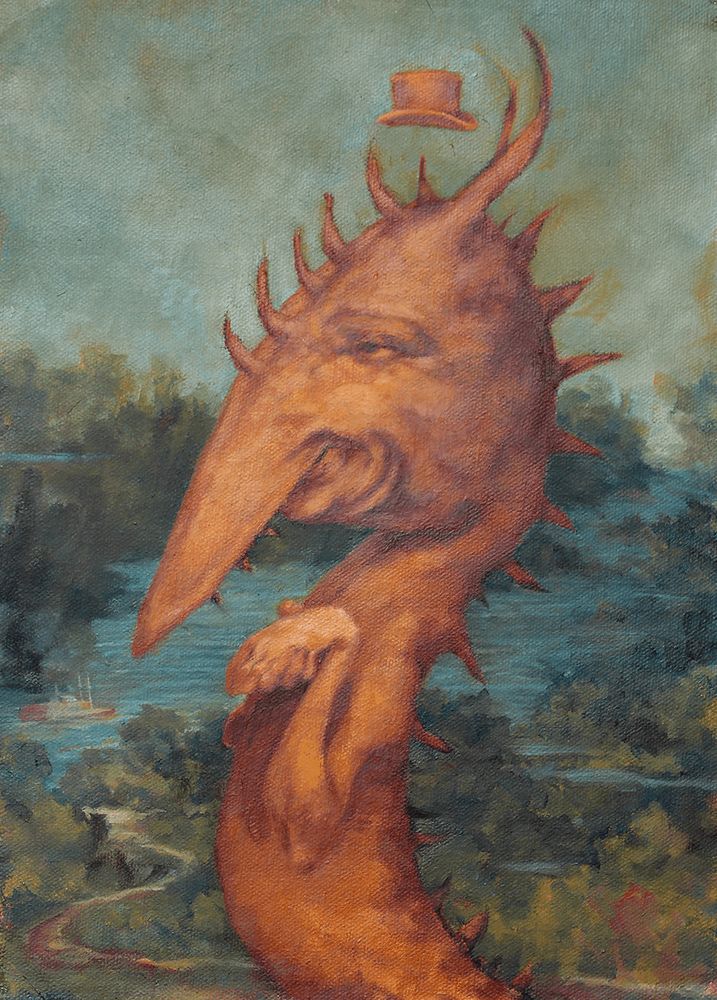 It was business as usual at Atlas Universalis headquarters. Making the continually needed updates to entries was the order of the day, as it was every day. While it was true that cartography generally moves along at a geological pace, the sheer number of entries for a project that authoritatively charted everything in the known Verses meant that several hundred additions and changes per standard cycle were necessary, if not more. The AU team, operating out of a pocket dimension outside of normal space, had grown quite accustomed to this level of commitment, and took pride in the fact that their job of mapping contributed to both the stability and the excitement of life in the Verses.

Taking great care to make sure that each entry was accurate and correctly located was of the utmost importance—while not even the Chief herself knew the epistemological truth of whether the Atlas made reality, or reality made the Atlas, or some combination thereof, the two absolutely had to match exactly. After all, a map that couldn’t tell you what was where wasn’t much of a map to begin with.

To that end, the candidates considered for employment on the project were only ever drawn from the tiniest upper percentiles of beings with a penchant for organization. It was for this reason that Omnitongue Sesquipedalus Dexducapheme was never approached. Sure, she had done some very interesting workings in order to fit an infinite amount of knowledge into a finite space, which was very much in line with the kind of thinking that drove the AU’s celestial cartographers. However, the Library’s infinitude, which meant the job could never be fully completed, was hardly an excuse to simply abandon any attempt at imposing a workable, rational system on an enormously messy pile of books.

For the most part, this methodology of hiring had gone off without a hitch. If the AU cartographers had kept a sign like those commonly seen in many workplaces, reading “X cycles since our last accident,” the X would have been an arbitrarily large number. It seemed pointless to keep track of accidents, since they didn’t occur, and it really wouldn’t have amounted to anything except a bureaucratic responsibility, along with the occasional need to purchase or produce a new set of digits when the next order of magnitude was reached. The AU already had plenty to do, and patting oneself on the back for doing something that’s really just a prerequisite for your actual work inevitably ends up feeling rather small.

Still, as infrequently as it was necessary, it was nevertheless the occasional retirement to a particularly attractive location after several hundred millenia of service, or the accumulated aging that took place when a member of the field team had to exit the pocket dimension to go confirm the accuracy of a particularly obscure entry over the course of a long career, that meant the Chief needed to go looking every so often. Having recently lost Shelley, a cephalopodian with an exceptionally sensitive foot who was noted for the natural ability and compulsion to sort grains of sand while moving across them by whether they had even or odd numbers of facets (even to the left, odd to the right), the search had begun again.

Shelley, for their part, was undoubtedly as joyous as ever to live out the remainder of their days on the rimworld that had formed containing no silicon, and therefore, no sand to be sorted, when it reached its point in evolution where many types of plants and grasses were in abundance, but no animals had yet come into being, and was thus full of lots of tasty snacks, and no predators. Happy trails, Shelley!

Taking the broad scope that goes along with a project the size of the Atlas results in a few fundamental assumptions, though, not the least of which has to do with eventuality and the law of averages. Improbable things occur from time to time, statistical anomalies that end up making for some of the most fascinating entries; in fact, life itself is rather unlikely in the grand scheme of things. Nonetheless, here we are, and it’s certainly fascinating. To a celestial cartographer, though, there’s no such thing as luck. Something exists, and it gets put down in the Atlas, or something gets put down in the Atlas, and it exists—things happen as they happen, and are documented, and all is well in the beautiful, harmonious realm of the Verses.

But somewhere out in the overlap of Commedia and Kaleidoscope, somewhere very funny and very abstract and very difficult to map, a couple of tricksters had hatched a plan. One of them was in it for the laughs, and the other because it was a good concept, but between them both, they decided that luck, if it wasn’t real, certainly should be, if for no other reason that it was a meaningful reflection of the way things normally go, a sort of funhouse mirror to the laws of thermodynamics. Plus, besides all that metaphysical mumbo jumbo, it was definitely going to be interesting. So, they pooled their resources and wrote it down in an important book, just like that, L-U-C-K, and all of a sudden, it was a thing. Then, through its circuitous routes and mysterious ways, it went out and made a lot of interesting and funny things happen over the ages, and kept on working toward its apex, just as the mechanism that drives the Verses slowly winds toward its eventual conclusion. Which brings us to Juston.

He didn’t know it, but he was the luckiest being alive. The circumstances that led to his existence were a chain of events so improbable, that to list them all would take up almost as much space as the Atlas itself. Outside of being born on Earth-Prime, which is in and of itself a statistical anomaly, his ancestors included several lottery jackpot winners, and one unfortunate soul who had been struck by lightning on seven different occasions during the course of his life. It’s said that after taking the fifth strike while hiding under the cover of dense foliage, he resigned himself to his fate, and simply accepted the sixth and seventh hits with a disinterested look, even as the smoke rose from his smoldering boots. Juston's parents, both diagnosed by reliable physicians as infertile, met through a confluence of flight delays, replacement buses, wrong turns, and a case of mistaken identity at a Toledo, Ohio Denny’s of all places, that would boggle the mind of even the most lackadaisical and brusque transportation director who is zealously dedicated to their job of making travel as uncomfortable for as many people as possible.

In short, Juston should not have been. But, as luck would have it, he was.

More importantly, Juston should not have been contacted regarding the opening at AU headquarters, because he was by no means an exceptionally organized person, nor did he have any experience in cartography whatsoever. He was a notoriously unpopular blackjack dealer at the Choctaw casino just on the Oklahoma side of its border with Texas. Regulars would get up from the table when he was switched in on rotation because they believed he was unlucky for them. They were right, because he was putting his luck to work for the house. He didn’t know it, but he would have made a lot more money a lot faster (and probably a lot more friends, too) simply by switching sides of the table. But a job was a job, even though he didn’t like it altogether very much, and he went on with honestly working until another convoluted series of events resulted in him receiving someone else’s invitation to an interview with Atlas Universalis for a job he had never heard of, much less applied to.

How he passed the interview, nobody can say; just lucky, I guess. The Chief was all smiles when the two of them came chuckling out of her office and she called for the cancellation of the rest of her appointments, announcing cheerfully that Juston was the newest member of the team. He couldn’t have been happier, because what mortal wouldn’t want to live outside of the constraints of time, learning about all the places in the Verses, with their wild and wacky flora and fauna? Besides, AU had a strict no-smoking policy, which was a dramatic improvement over the casino.

He did his best to take advantage of the opportunity that fate had presented him, and worked diligently to learn the system of operations as quickly as he could. He was an agreeable colleague, and as a long-time fan of several popular science fiction properties from back home on Earth Prime, had no trouble adapting to the diverse and varying biologies of his co-workers. All in all, it seemed for a time that luck had run its course, and elevated the humble and quotidian to a position of great import and interest, and that would be that.

But fortune is fickle, even if it favors the bold, and in a turn of events that would have surprised even the notorious pranksters who contrived luck in the first place, Juston accidentally bumped into Xcrzotsonlf while the latter was carrying a stack of entries to proofing for final revision, causing the pair of papers on top to jostle and flutter to the ground.

”Oh, oh man, I’m so sorry, Xcrz, let me get those for you,” Juston said, bending down to pick them up as graciously as he could and hastily replacing them on top of the stack. “I was distracted thinking about how cool it must be to see the massive Lumi migration on the gas giant in the Belforath system.”

”I wouldn’t know anything about that. My crystalline structure would shatter from the radio interference that all gas giants emit before I even got within a standard astro of the planet. Are you sure these are in the same order?” replied the sentient saltform, with a hint of annoyance.

”What? Oh, yeah, yeah, same order. That one was definitely on top when I picked them up. Sorry again, I’ll be more careful in the future.” Juston smiled abashedly and hurried off to his next task, leaving the ionic iodide to drop off the pile of paperwork, which just so happened to have its top two pieces transposed out of order.

Tod woke up feeling dramatically not like Tod at all. He felt, in a word, “bitey.”

Far away, Bitey, who had never worn a hat in his life, woke up thinking that his head was awfully cold without his hat.