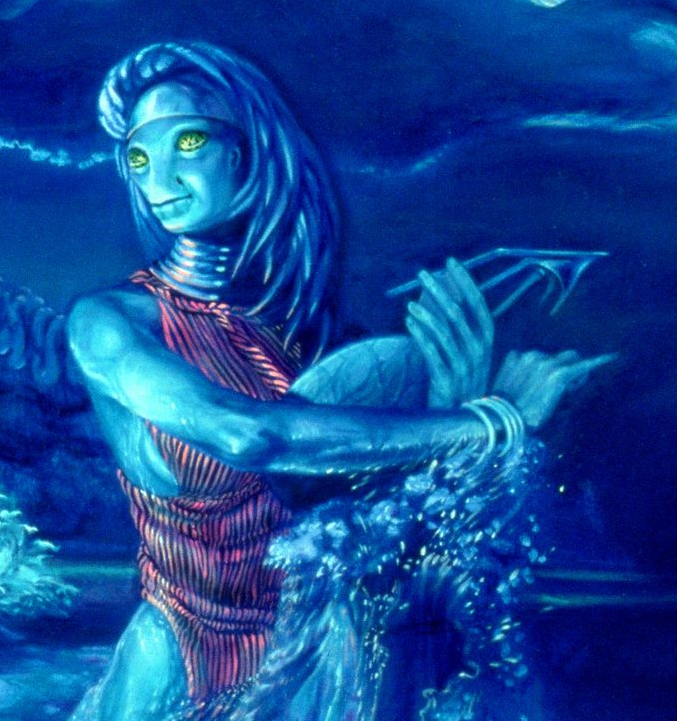 Uluantha is one of the sentient bipedal species native to the ecosystem of the Planet O’ooryu  in Fantasia.  Her people have some physical characteristics reminiscent of the undersea creatures known as nudibranchs on Earth, such as having bodies in a wide variety of vivid colors and a fleshy brachial plumage where humans have hair.

Uluantha represents her clan, serving as their delegate to the Assembly of Clans which governs the entire planet.  She’s rather young for a delegate, and has led an argument for change that would uproot the status quo.  Since the formation of the Assembly hundreds of years ago, the use of Sorcery has diminished in popularity while practitioners of Enchantment have risen to great heights of power.

When the Initiative first made contact with O’ooryu through a Safety and Ethics agent, Uluantha acted as their liaison and taught them the fundamentals of wielding the magical energy known as lifespring.  This led to a successful collaboration between the Initiative agent and her Clan in the yearly Lifespring Harvest, which Uluantha leveraged to facilitate building a research agreement between the Assembly of Clans and the Para Initiative.

While most people specialize in one area of magical expertise, Uluantha has studied all three branches of Magick.  She felt that being a generalist would allow her to represent all her people more effectively than if she was too deeply committed to one area of study exclusively.  Her story begins in #35 The Harvest, and continues in the book Life on the Big Wet